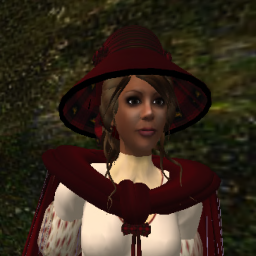 I spend a fair amount of time in the on line world called Second Life. I read somewhere the median age of the people in Second Life is 55 so I guess these are my peers. I have some land there and I breed horses there and I have a bunch of pets including a cat (of course!) and a blue whale. I can fly in Second Life. Now I am actually working and getting paid there too.

I am now an interviewer for a study called Mrs. A and Mr. B which is detailed here:

The study is about improving patient care and overall I am well qualified to do the job and I am enjoying it. My primary role is acting as a facilitator for group meetings with subjects and I have to follow all the standard rules about patient confidentiality and ethics. I had to undergo a formal hiring process including updating my CV, proper training and I had to get certified for American ethical standards. The reason I got the position is 1) with my PhD in Human Genetics I am qualified to be one of the people involved and 2) They required facilitators who were not American and would therefore be unfamiliar (relatively) with the American system and be less likely to be biased.

The study has been a real eye opener thus far. I am learning a lot and mostly it is about how great and awful the American system is.  My observations are just being confirmed by participating in the study in case after case. I blogged about this before in my other Tumbleweed blog here:

One of the nicer aspects, aside from being in research again, is that for the next three years I can expect some regular income that should offset my horse breeding habit. To avoid exchange they have even agreed to pay me in Lindens. Now breeding horses in SL, while a whole lot cheaper than in real life, is not free. They need food and salt licks and land to run around on. I have a fair sized herd of about 60 horses. So I am hoping my new job will offset my SL costs. An interesting job, a way to pay for my bad habits, and chance to be contributory in the world of scientific research. That is a bargain!