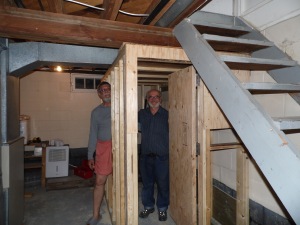 Work continued on our shelter. The framing is done and the men moved to the door. FEMA has an entire pamphlet on the door for a shelter because the shelter is only as good as the door. You can have the best shelter there is but if your door is weak you’ll end up like the father of the lady scientist in the movie Twister, sucked up for some close and personal encounters with the big one. After checking the diagrams FEMA has, our engineer decided we would need to make a door with the same specifications as the walls, two layers of 3/4 inches plywood glued together and then screwed together. We went to the lake for a swim while we were waiting for the glue to set. It was so pleasant we stayed to watch the sunset. 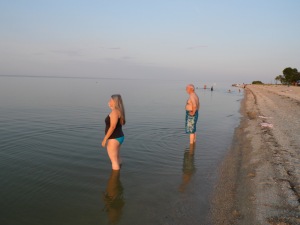 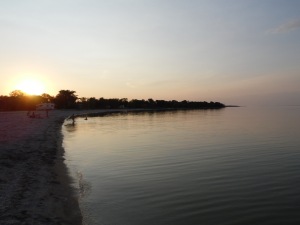 Back to work. The door needs some heavy duty hinges, and then it would need to be framed into the structure itself, so that even with extreme sucking it would not be able to open outward. It would also need some fancy deadbolt hardware on the inside. Given the design, the basic door had to go in before the layering of plywood and framing on the outside.

Industrial strength hinges with the screws also glued in to make it strong. By this point we were out of wood and Bryan has to leave for a visit with family. He’ll be back in a week and we have plans to go to a country music concert weekend. 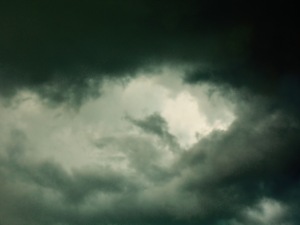 This morning we were awakened by thunder storms. A quick check of the radar showed severe storms approaching fast. Then we had some fun watching more rotating clouds overhead doing the eery green thing while Environment Canada issued warnings. Wow it came up fast! Twenty minutes between nothing on radar and then this strong storm. It passed us by, dumped a bunch of golf ball sized hail into the lake 12 kilometres east of us, and we are now sitting in a severe thunderstorm watch with more storms expected later today. Ever feel like you’re in a bulls eye or someone is trying to give you a message?

We had planned on waiting until next month to purchase the next $300 or so of stuff we need to finish the shelter. However the forecast is for extreme heat (35C/95F) until Saturday and then an approaching cold front will mean yet another round of severe storms. So we may yet decide to buy the rest on the line of credit and finish this thing for Saturday. For today though, we will just get caught up on other stuff. Having company is great. Having a project to build is a lot of fun. Still we are behind on a whole bunch of little things, there is sawdust everywhere in my house. All the floors need washing. Time to get to work.