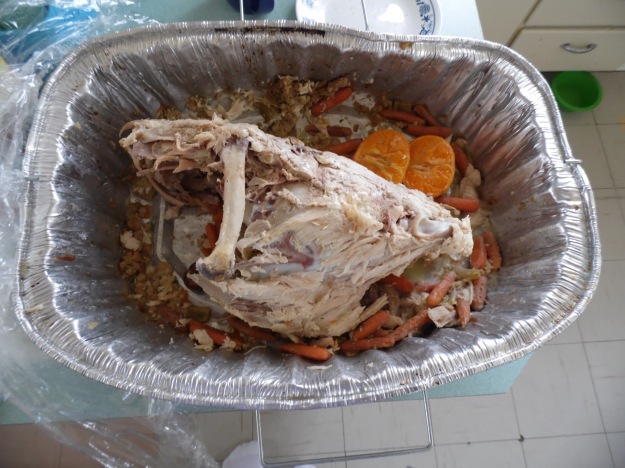 We had the absolutely best turkey dinner ever at my son’s home. He used a recipe that among other things called for a bed of vegetables and oranges. My son and DIL work full-time and so don’t have extra time for things like soup from scratch. When she offered me the turkey carcass, I jumped at the chance. I added everything the turkey had cooked with but the oranges to my big stock pot. I also added enough water to halfway cover the carcass.

As you can see the turkey came with carrots and celery and seasoning already part of it. I also made sure to scrap the pan of the brown stuff on the edges and bottom of the pan. That brown stuff makes the broth really tasty. I also scrapped up all the fat and seasoning stuff as well.

After a slow simmering for about two hours, the turkey falls apart easily and the broth has taken on the creamy colour you can see here. (Steam on the camera made the picture steamy but you should be able to see the difference.)

The next step is the most tedious and took about twenty minutes. Separating the mixture from the pot into bones to be discarded on one plate and meat and veggies to go back into the pot on the other. One needs to work fast to avoid giving the stuff time to cool. Cooling food left standing around is bad. It can grow nasty bacteria if you aren’t careful. Also if you are canning you have to be extra careful about washing your hands and using clean utensils. I emptied the plate back into the simmering stock pot several times to keep the separated stuff hot.

I had no need for turkey soup right away. I wanted to have it handy “put by” in case one of us is not feeling well. There really is nothing as tasty as homemade soup if you’re feeling ill but if you’re not feeling well, then who has the energy to cook soup from scratch? I ladled the soup into well cleaned and rinsed jars that had been sterilized with an extra boiling water rinse.

Even though the stuff is still really hot, you can see how the fat is separating and collecting on top. If you dislike the fat you can skim it off at this point. Personally I think the fat gives the soup more taste and fat has been given a bad name it doesn’t deserve so I left it on. I also added a dash of salt and a tablespoon of lemon. The lemon makes the soup slightly acidic which discourages nasty bacterial growth. Salt is also a preservative and brings out the flavour. I know salt is bad for us, but a dash in a whole jar is not that bad.

I then capped the jars and put them in the pressure cooker for one hour.  It is not safe to put anything into jars with meat or any low acid food, without using a presser cooker. Boiling water simply doesn’t get hot enough. You need the extra pressure of a pressure cooker to get the internal temperature high enough to kill nasty bacteria. That has to be done according to your pressure cooker’s manufacturer’s directions. The amount of time required varies depending on the kind of pressure cooker you have, the size of your jars, what your home’s altitude is, and the size of the individual pieces in the broth.  If I had added say, a whole potato or dropped in big meatballs I would have left it in my pressure cooker for an hour and a half. After the jars came out of the pressure cooker I left them to cool. The seals popped tight almost immediately. They continued to bubble for a long time afterward as they cooled because of how high the internal temperature got. I left them undisturbed until morning.

Now the jars have cooled. The seals are on properly and the fat has settled on top again. The jars can be left for up to a year so they need to be dated so you don’t forget to use them up before they age too much. Now whenever I want to make turkey soup, I can open a jar and reheat it in a pot or the microwave. I do it in the pot and I add vegetables (which this batch won’t need) and some rice or noodles or maybe some potatoes and cook them in the broth at a slow simmer before serving. This is also great with a loaf of homemade bread. The one litre jar is just right for the two of us.

If you don’t like canning you can freeze the soup. I have found freezing changes the flavour and not in a positive way. Jars of home made soup taste nothing like a tin from the grocery store. One of the nice things I have found is home made, home canned goods taste just as good as home made just made. And you can’t beat the cost of doing it yourself.