Is there any form of human being more insanely optimistic than a gardener? Thanks to the polar vortex  we have not had a day above freezing in weeks and snow is covering everything. The view out my window is bleak and white. Manitoba always seems like the land of endless winter in a snowy April. But I am a gardener and I know this misery will end. The latest forecast has the polar vortex moving away, finally, Tuesday. I am so ready for sunshine and above zero temperatures. 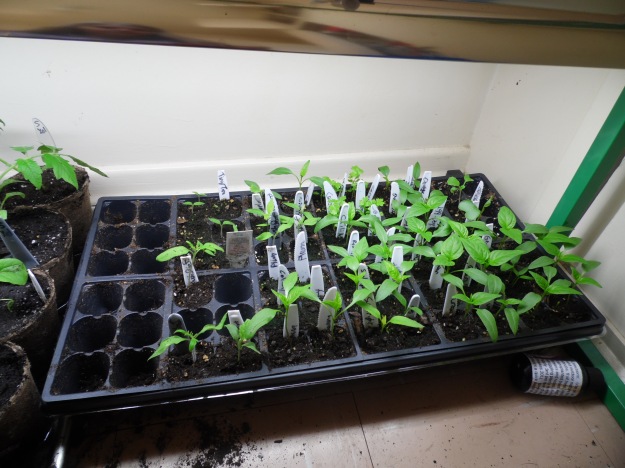 Here are my current seedlings. What you see are almost entirely pepper plants. I haven’t had much luck with peppers plants in the past so I quit planting them. The season is too short to grow them from seed. You have to have big plants to set out int he garden or you can’t hope to get anything before our short summer in over. Part of the problem is I always had a limited budget for nursery seedlings and because peppers are low producers, they were low on my priority list in the budget for nursery plants. Last year I was inspired by my neighbour Diane who had the most wonderful peppers in her garden. She started from good sized nursery plants. That would seem to be the trick. This year, I bought lots of different pepper seed types and I am going to try going pepper crazy.

I figure if I can get all or at least most of my bedding plants started from seed the special equipment I bought will be paid for. I carefully followed directions for starting plants from seed using a special covered seedling starter with a heating pad underneath. I kept the clear lid on the plants until the seeds came up and now they are too big to keep the lid on. As they outgrew the tiny seed starting pot I moved them into bigger pots.

Most of the plants still in the original seed starting planter are green peppers but I also have sweet purple, red, yellow and orange pepper plants as well as pairs of hot banana, hot Asian chile, and habanero. I will probably hate myself this August when I have tons (assuming no disasters like a single bad hailstorm) but I intend to make my own sauces, ketchup, salsas, pickles, and seasoned tomatoes this year. I know it never comes out as nicely as you plan but there are so many great ways to preserve peppers, that I am really going to try peppers again. There are also a couple of eggplants in there. I have never had luck with eggplants either for the same reason as peppers. We shall see.

The empty 12 parts of the seed starters on the left in this picture were for starting tomato plants from my own seed. I kept seed from my medium and small yellow tomatoes and I prepared them for overwintering by letting them ferment a bit before drying according to some instructions I got on line for that. I was really delighted to see how the seeds took. I put three seeds in each slot and in the image above I have just transplanted them into 3 inch peat pots. I paid between $2 and $5 for assorted seed packets of peppers I bought so I will keeping seed from them again as well. The tomatoes have worked out so well I decided to buy some more red tomato seeds, beef bush steak and tiny tim as well. They are three weeks behind the yellow ones but doing very well. If they continue I won’t buy even red tomato plants. 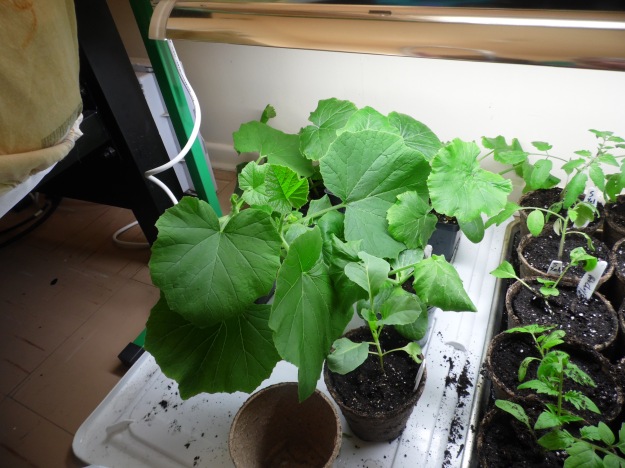 Another item very big on our eating list is zucchini.  Last year I had two plants and once the plants started producing we ate everything we got as soon as we got it. So I planted 4 zucchinis from seed. I think I made the mistake of starting them too soon and that little slot in seed starter is just not enough room for squash family. I ended up transplanting them into bigger pots almost right away and they are ready to go into garden now. Of course it’s far too soon so they will be going into some even bigger pots instead. I also, for a lark, I kept some acorn and other squash seeds and I started two each of those. I don’t know where I’ll even put those in the garden but I guess I am doing assorted squash as well. Some might just end up in really big pots in strategic locations around my flowerbeds. 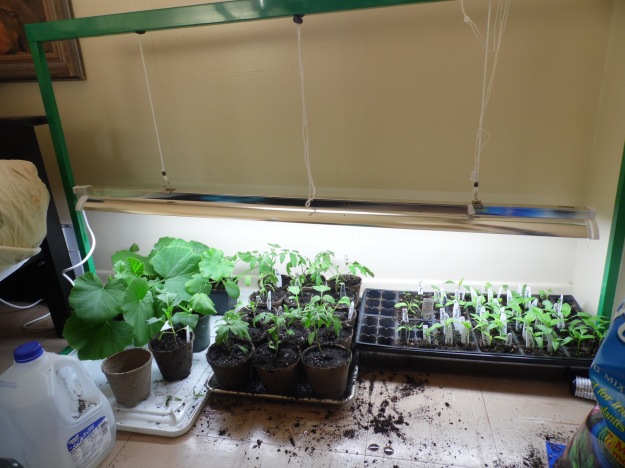 I was inspired to start my own bedding plants by my daughter who was growing pots on her city balcony. I read up on starting seedlings and the biggest thing is they need a lot of light when they are just popping up or they get spindly and fall over. Once they get a bit bigger they can make do with less sunlight. During that critical first days stage they need at least 12 hours and preferably 18 hours of bright direct light. In order to achieve this I purchased this light with a stand for $40 while I was in the USA. So far it has worked very well. none of the plants are spindly.If those tomato plants make it to the next size pot the light will have paid for itself from 6 plants.

I am running out of room under the light! I also have a small portable greenhouse sitting outside and as soon as the weather goes above zero daytime the older squash and zucchini and the tomatoes can go out there during the day to get their light. That was what I had originally planned but I didn’t count on that polar vortex bringing a second winter. Meantime I am using the window as much as I can when it is sunny. 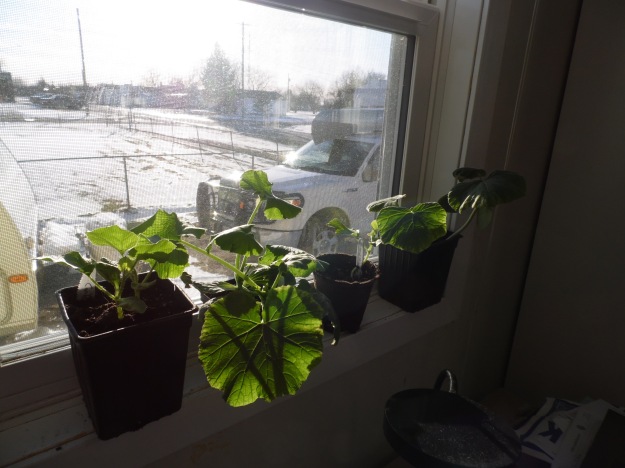 It’s a little early to say for sure, but if I continue to have good luck with seedlings and they continue to grow properly and I keep replanting them, we should have some really nice big bedding plants to put out when the garden is ready on the first full moon in June after the big northern geese have migrated out of our area. Those are the cues the locals use for planting things that can’t take a frost. I also intend to use that seed starter to start some of my beans and corn in advance and have some staggered harvests. And the green is sure nice in our current white white white world.

We bought a stick house and so we’re safe from this but this will really hurt a lot of people we know.