I had previously complained about the ridiculously high cost of pet vet care.

Saturday afternoon the same vet showed up for yet another parking lot session of shots. All three animals got all their shots and I got a certificate good for two years of border crossing from the vet for $150 total. $150 for three animals (two dogs and a cat)!

Again the same quick efficiency, no frills, get it done attitude I love about the country.

We didn’t bother with heart worm this year because I discovered you can order a big fat tube of heart worm medication for a horse for $10 from Amazon. Horses require a much larger dose than dogs and cats but since I have a degree in biochemistry I know how to do the conversion to get the right much much smaller dose. (I honestly think anyone who can double a recipe or halve it could also do that same thing. Be careful though if you do it wrong you’ll kill your pet. The drug is called ivermectin and the dog sized dose from horse medication works out to about what you can get swirling a toothpick in it. You can also order dog sized pills that even with shipping will be 1/4 to 1/2 the cost from Australia where a rip off vet prescription is not required and you aren’t lining the pockets of some crook in big pharma.)

And so the whole $60/six month heart worm in the little beef flavoured capsules is a rip off. The medication costs pennies. It’s all in the packaging and marketing. And insisting you must have the heart worm blood smear once a year is also ridiculous since if you have been using the medication faithfully the odds of killing your pet by continuing the medication are so very very low they are almost zero.

What typical small animal vets charge for vet care in the cities in my area is a crime. In 2013 I paid over $250 for each pet and even that required a lot of arguing and refusing stuff in order to keep it that low. It is a rip off. Let me say that again. IT IS A RIP OFF!!!! It is a whole series of completely unnecessary tests and procedures that are  at best worthless and at worst potentially dangerous for the purpose of filling pockets and the veterinary profession should be ashamed of themselves. If a country vet can pull into parking lot, fully vaccinate nearly 100 animals in an hour for $50 each there is no reason such a thing could not also be done in the city.

Oh, and our town has free vet housing, hospital/clinic and office space sitting empty because most vets in Canada prefer their over priced, high profit, rip off small animal city clinics instead of actually taking care of sick animals in need in rural area. That’s a double shame on them.

It’s been hard to read in other blogs where people have begun enjoying the fruits of their garden while, poor thing in the harsh cold north, I have not yet been able to plant but finally, finally, I can write another garden update. 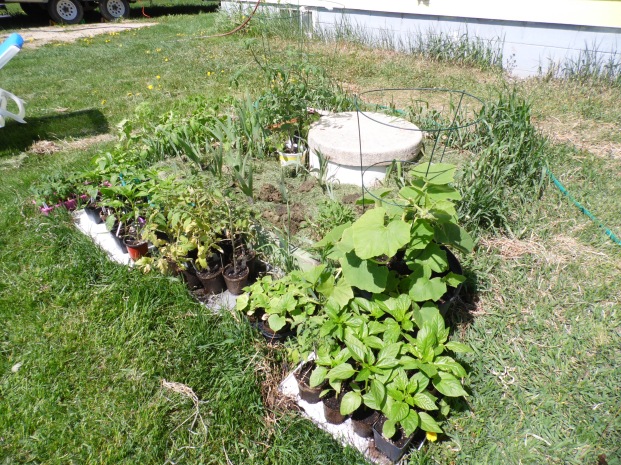 I have to wait at least two more weeks before I can put tender bedding plants into the garden without fear of frost. Even so, while the weather is hot and lovely I have been putting all those plants I started in my house out in the sunshine. The winter squash have long since graduated into the biggest pots I could find (scrounged at the dump) and they doing very well. Many of my tomato plants are actually blooming! I will not give into the temptation to think summer is here and plant them as I did last May 21st only to lose them to an early June frost. So I have to carefully water them every day and tend and fuss but wait I will. 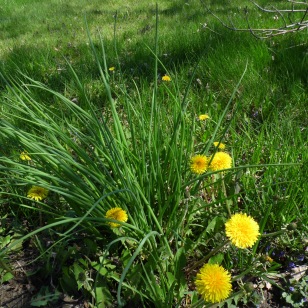 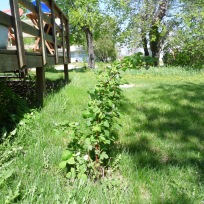 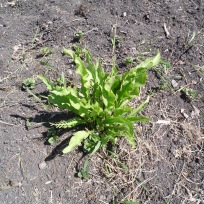 Last year’s planning has gone well. The raspberry bush came through the winter bigger than ever and is about to bloom. My careful tending of the rhubarb has resulted in two much more vigorous plants than last year. I planted chives and they survived and the plant is huge. Both my horse radish plants are up and doing well. Low spots in my drive which we filled with sandy gravel are covered with creeping charlie. Our monoculture lawn, something I hate, is now well polluted with creeping charlie. I love those little purple flowers and the bees do as well. My yard is full of honey and bumble bees. My wee little apple tree that had maybe five blossoms on it last year appears to be about to burst into bloom on every branch. I still have no idea if it will have edible apples or yet another type of “throwing apple” but it looks beautiful. I have decided I like dandelions even though I have bought one of those pointy things that let you get at the roots.

I love it when nature gives you a bonus and I got several this year. Normally our winters are far too cold to let many things most southern gardeners consider perennials survive but I was delighted to discover many green onion and garlic shoot popping up and wonder of wonder, my parsley and cilantro made it! I had to bring a salad to a senior dinner and I used purchased lettuces but spiked it with my own chives, onion and garlic greens, and lots of fresh cilantro and parsley. Yum! Just before we left one of our trees came down and we simply piled the branches on the garden until we could find a better place. The result was a heavy blanket of snow and I think that is why the parsley and cilantro were spared. I will try the same thing again this year. The other nice surprise was two local flowers among the grass, the Manitoba provincial flower, the Prairie crocus. Long past its blooming but lovely to see, I have marked both plants so we can keep the grass away and not mow them. 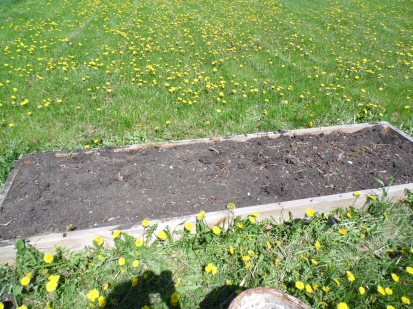 Gardening is not just about this year, but also next and the next after that. Late  last summer I made two boxes of cedar and piled them with grass clippings and compost and then covered them with black cloth and let them bake in the August heat. This spring I was delighted to find rich peaty soil. I ordered strawberry plants, ever bearing, June and a heritage hardy one and every plant took. I am not expecting to get many strawberries this first year but next year should be the beginning of many a crop. The second bed is going to be my bean bed and I am going to put in a trellis and try growing a variety of beans including red kidney beans which I have already started from seed.

I bought five Saskatoon trees. Saskatoons are a native plant in our area that produce abundant small blueberry like fruits although it is actually a small apple tree genetically speaking and not a berry. The wild bushes are exceptionally hardy, being native to our area, and grow rapidly. Saskatoons with their sweet deep purple taste (a cross between blueberry and sweet apple) make wonderful jams and jellies and are great to eat straight from the bush by the handful. They can also be dried and then dried berries beaten into flour that when mixed with dried meat and formed into pemmican results in a 100% nutritionally balanced food that was consumed in winter when first nations people and early pioneers had to get through our winters without outside help. Saskatoons are especially rich in vitamin C and folates. The ones I ordered and planted are a cultivar with larger than wild berries, many more berries per bush, and a richer taste. It will be a few years before they grow enough to produce fruit but I am an optimist. Until they do I can always gather the wild fruit. 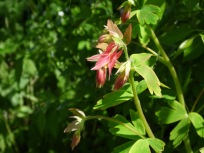 And last but certainly not least I inherited a neglected perennial garden and put a lot of effort into weeding it. The battle is far from over, as you can see, but I am proud to report more perennials than crab grass and weeds. I have tulips, Johnny Jump Ups, violets, both native Western and blue violets, already in bloom and the first Columbine opened today. This flower bed gave me so much pleasure last year bearing flowers for me all summer long. It is nice to see them back like old friends.

And finally the robins, my dear friends who vigilantly patrolled my garden ever on the alert for cutworms and beetles and slugs, have set up housekeeping once again. Every time I cultivate or weed or plant they watch me carefully and rush right in to check for edibles as soon as my back is turned. Every garden needs a robin family. 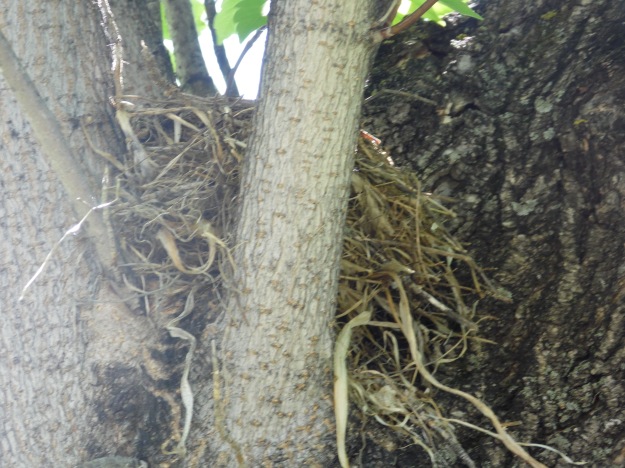 Up here at the 51st parallel summer is short but intense. The sun rises about 4:30am and sets after 10:00pm and the plants grow by leaps and bounds racing to cram in as much growth as they can on those long days before August frosts. I know my northern garden will catch up with my southern neighbours. Two more weeks and the tomatoes can be planted. I have already put in seed for that which is frost tolerant. Soon soon I too can eat from my garden like my southern neighbours.