Sometimes I need to go back to old pictures to see how much progress I’ve made because it gets depressing to think about how much work this little house has needed. When we first bought it I could see immediately it was all cosmetic stuff. Everything about the house was solid. What it needed was all “easy” stuff. Paint, new windows, a better kitchen sink. Working our way to getting all the easy stuff for the third summer is getting exasperating.

So I stand back and look at the house today and think, well we have come a long way! The exterior is all repainted. The wooden decks were all given a coating of waterproofing stuff. The vegetable garden was rescued. This summer we built a nice little fence outside to create a doggy space. The garden is coming along so nicely. Tending the flower beds is cheap and gives such immediate rewards. If I only look at the outside, the house feels entirely and comfortably mine. 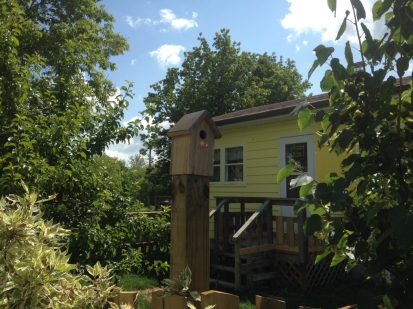 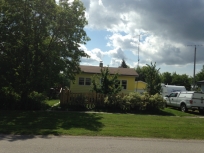 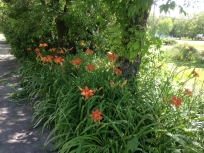 This summer we began tackling the inside. The kitchen is in so many ways the heart of the home. I really wanted my own kitchen space made over the way I like and want it. And so that is where I began the inside.

I went through a whole lot of internal debate about whether or not to raise the counter and whether or not it might just be better to tear out these old cabinets and buy new ones. It certainly would have been easier! (I think.) In the end we simply upgraded the old ones. We did this for three reasons. One, it is much cheaper to repair and repaint old cupboards than to buy all new ones. Two, these old plywood cupboards are far sturdier than anything you buy on the market today short of custom designed solid oak cabinets made the old fashioned way. That would likely cost more than the whole house even if you could find a real old fashioned craftsman to drive to Alonsa to do it. My drawers even have dove tails on the ends! How often do you see those these days? If you have ever lived with pressboard cupboards that start falling apart by the time they are five years old, you know exactly how nice solid plywood can be. These cupboards are as old as I am and they are still working perfectly. Third, call me old fashioned but I really felt the handmade plywood cabinets were integral to the character of this little farmhouse. That went for the lovely old fashioned counter top. I simply don’t like the granite that is so popular these days. Ripping the old cupboards and countertop out and putting in new modern cupboards and counters just would not feel “right”. I was going to raise the countertop but then one of the older residents pointed out that lower cupboards are easier as you age and need a walker or to sit while doing dishes. Since we are hoping this home will be our last until we go into the ground, we need to think of things like that. 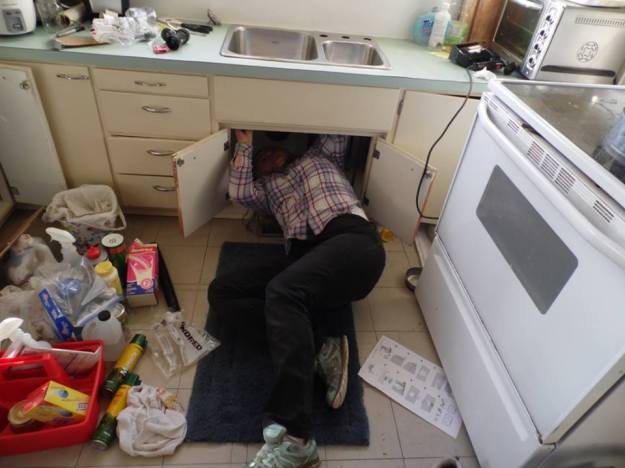 The single most irritating thing about the kitchen was one medium size sink. I like having two sinks. Call me crazy, but a kitchen isn’t right to me without two sinks. Since it is a small kitchen, it took some time to find the right double sink that fit but Home Hardware had it. Now I have a medium sink that is the same size as the one I had before and smaller sink on the side to dump things in when I do dishes and all those other times it is great to have two sinks instead of one. 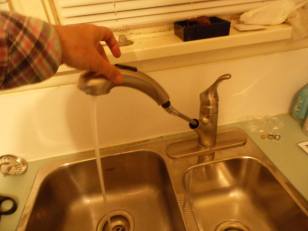 We added a spray tap that pulls out (what a great new fangled gadget that is!) and a second small faucet for drinking water. We have the most delicious well water you can imagine but it is as hard as anything and so we have a water softener in our basement. But who wants to drink that stuff? For a while we were going outside and getting drinking water from the outside tap which does not go through the water softener. This was fine in summer although I did get some weird looks going out in the morning in my nightgown to get water for my morning coffee. Last fall I then installed a basement tap that allowed us to get drinking water without going outside. It also allows us to drain the system of water before we left for the winter. That was a huge improvement for morning water runs, especially for November when we had snow on the ground. Now we have the deluxe model with a separate tap right in the kitchen. 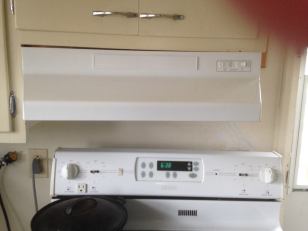 The other addition was a much needed stove hood. Our house is small and so if you burn something or fry something the fumes fill the entire house really quickly. We also have humidity issues so a way to quickly clear the air is very handy. The new hood (again compliments of Home Hardware) turned out to be a really big job because I had to wire it in. We soon found the charcoal filter was inadequate and we needed a vent to the outside. The precise vent was hard to fine but Amazon provided what I needed to install an exterior vent. Both jobs were successful but many cuss efforts. I also discovered that not everything in my lovely handmade plywoods cupboards was perfectly square so we added “trim” to the “must have” list. 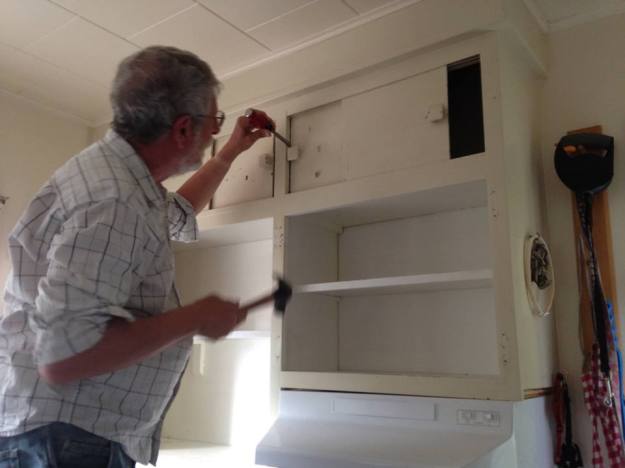 The kitchen in our small house also has few cupboard spaces and unfortunately two perfect good cupboards were inaccessible because one of the previous three owners painted those old fashioned sliders shut. Fortunately, the application of a little superior male intellect from hubby dearest and some more plywood and a trip to RONA for just the right hinges meant the old impossible doors could be replaced with new ones that actually open and close with a touch. We made new doors for that inaccessible set of cupboards over the stove and now I have two new lovely additional cupboards on top.

We decided to keep all the original hinges. They are sturdy and working just fine. Plus at an average cost of $5/hinge that was $180 we could use elsewhere. We did opt for all new matching handles. If you look at the picture where I am installing the sink, you can see how we had three different kinds of handles. I found these lovelies on sale very cheaply ($1.50 each) from Amazon. The ones I really wanted with lovely twinned ivy leaves and acorns were $70 each and they were just not lovely enough for that much money. What a difference a coat of paint and all new handles makes! (Thank you hubby dearest for cheerfully joining me in the effort of repainting and being ready to jump in anytime I needed another pair of hands or some brute strength.) 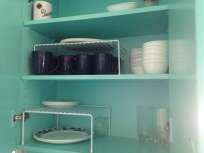 The four drawers turned out to be the biggest nuisance. Drawers have multiple surfaces which means many more sessions of doing a coat, then waiting then applying a coat, over and over again. The different handles meant that I also had to fill the original holes with wood putty and make new holes and then sand. That resulted in almost as many cusses as stove hood installation required.

I have ordered new curtains in a pretty green and blue plaid to unify the teals and greens. We have a couple of men coming in maybe some time this week (depending on how much time ranching takes up first) to install the last two new windows we need, including the one in the kitchen. (I am hoping for more rain!) And I have to replace the yucky old yellowing electric outlets and face plates with fresh new white ones and then repaint the walls. The walls I am doing in “Alpine Air” the fanciful name for a near to white lightest possible teal.

Our original plan for this summer was repaint the entire interior of the house and install new flooring. I know kitchens are the biggest fussiest job there is but I am beginning to think just getting the kitchen done might be enough for this year. I don’t have an after picture yet because we aren’t at “after” yet. I still have lots of touch ups and clean ups. I can say, the cupboards are done!

“Blessed are You, LORD our God, King of the universe, Who has kept us alive, sustained us, and enabled us to reach this season.”

3 thoughts on “My kitchen cupboard renovation.”