Our second day of staying in Moab we took in the northern part of Canyonlands National Park. This road and trail system is called Islands in the Sky. It is not just a fanciful name. As I stood on the overviews I kept thinking how this is really the northern end of the Grand Canyon and it is indeed grand.

Canyonlands is laid out much like Arches. There is a visitor’s centre and a long stretch of highway with many overlooks and trails from very long and difficult to short little walks. We had the dog issue to consider again so we didn’t do any long trails but we did do all the short ones. Unlike Arches, the distances between the various overlooks was quite far. The longest one being 35 miles, but the views are spectacular so I didn’t mind. For context, this portion of the park is on a triangle of land in between the Green and Colorado River (which runs through Moab on the right of the picture) and both rivers have their own canyons and the two eventually blend where the confluence is. The drives take you to various overlooks so you can see both rivers and their canyon and the last point is the grand view overlooking the confluence point. The rivers are so deep in the canyon that don’t really see them. You just get glimpses of bends. The canyon has two rims, the one we were on and a lower one about halfway that forms a secondary plateau. All around the lower rim of the two canyons is a 100 mile long trail for four wheel drives with higher clearance and power than my F150. It takes two full days to drive that 100 mile trip giving one the idea of how challenging such a drive is. We kept seeing glimpses of the road from every view point. 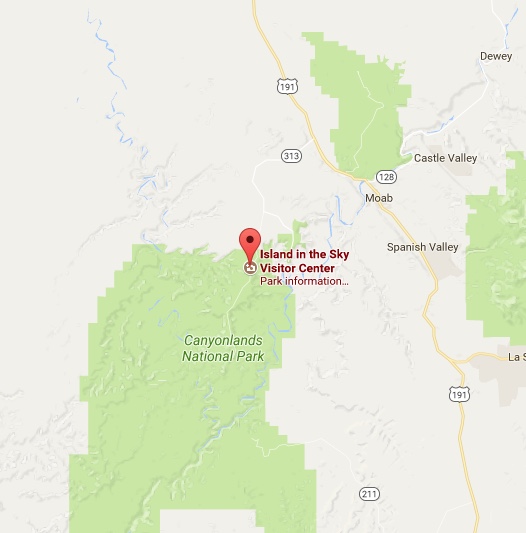 At each overlook we stopped and walked about taking in the grandeur. It is so beautiful I actually felt drained and in awe by the time we were finished. Everything about it is stark and potentially dangerous. It is easy to walk right up to the edges of the canyon. Dick and I both suffered vertigo, something we normally don’t. I was able to go closer than Dick. Prairie flatlanders that we are, the sheer cliffs and towering heights were overwhelming in their beauty.

I have to work on this whole selfie thing. I can’t seem to get a good shot. Dick took pictures of me while I tried to do a selfie and the result was amusing.

When you are accustomed to the lushness of green Manitoba in summer the desert seems a harsh and unwelcoming place, as barren as winter. The main feature and only bit of green is these tall twisted junipers. They smell heavenly. There are wide spaces with nothing but sand and dirt. Dick was delighted to find a single ant. I saw one grasshopper, just one. The only other living creatures we saw were ravens. The ravens liked to ride the thermals just off the cliff edges increasing my sense of vertigo watching them. I do wish I could fly.

It took us several hours of go over all of the viewpoints and walk the trails we could where we felt safe leaving the dogs in the truck. Even though we only did short trails, by the end of the day we were both exhausted. The drive back from Canyonlands to our campground seemed to take forever. We both fell asleep early and slept soundly. Another item crossed off my personal bucket list. However as we gave the dogs a last walk before bed we both commented on how lovely the area is but how much it does not feel like home to us. We are both beginning to miss the open prairie sky. Our trip to Moab has made us appreciate our own home even more.

1 thought on “Canyonlands National Park’s Islands in the Sky”