The weather had warmed and it was time for all the rescued turtles who came through the cold stunning without secondary issues to go back to the sea. As always, the turtle release became a grand show for the public, an opportunity to encourage love of turtles and do a little education. The release was advertised by various means and by the time we arrived with Jack Rudloe, the line into the park was long. We spent 35 minutes in line. We were ahead of the turtles and a good thing we were. I was also grateful we drove in the same vehicle as Jack because by the time we got there, there was no parking left but space reserved for Gulf Specimen Marine Lab staff and guests. It was a huge relief when the vehicles from GSML and Florida Fish and Wildlife Commission finally got in, escorted by park staff down the wrong side of the highway. Other staff and volunteers had arrived ahead of us and set up. There was also a huge and impatient crowd. Traffic meant the turtles had arrived almost an hour late. 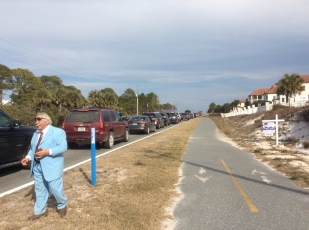 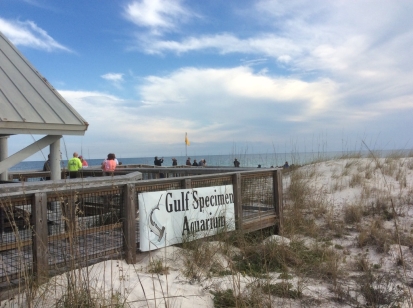 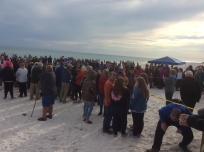 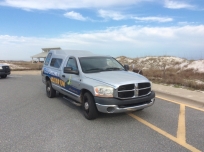 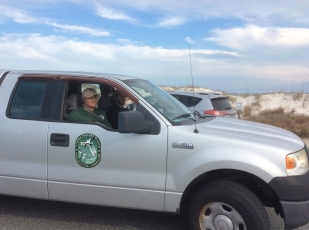 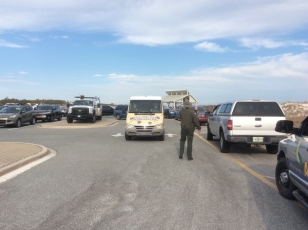 Dick and I were among those honoured with releasing a turtle. Somewhere in the mix was our own rescue turtle #36. The honourees were gloved and lined up and and each of us were given instructions to carry the turtle to the water and watch and make sure the turtle actually swam away. It was so exciting! The vehicle were emptied and then turtle after turtle was delivered to the FWC staff to be carefully ticked off the roster and then handed off to the honourees. There was no time to find #36. We got the turtle we got. I didn’t care. I know #36 was in there somewhere. 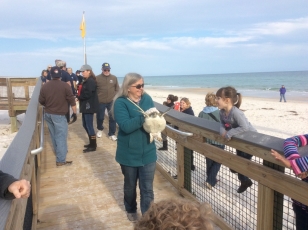 Two turtles went ahead of us. Dick got his turtle first and then I got mine. Dick went first. His turtle swam off sideways into the crowd before heading out to sea. I had to wait while the other turtles left the beach as each turtle had to go one at a time. During the wait I posed the turtle for his admirers in the crowd. 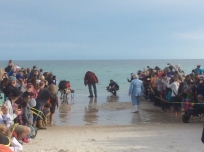 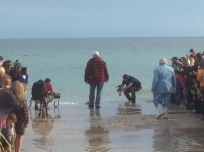 My turtle didn’t want anything to do with being a celebrity and as soon as he hit the water, he was gone like a shot. I was so happy! How exciting to be blessed with a chance to release a wild thing back to the wild.

Many more turtles followed. Some were big turtles. One special great big turtle had been a “guest” at GSML at the last cold stunning. FWC found her tag when they checked everyone for new tags. That really gave the staff a big high and measuring and weighing her meant all kinds of new data on turtle growth. 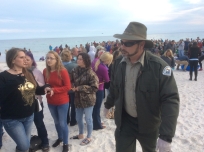 Smiles all around and everyone who was on the permit got to release at least one turtle. 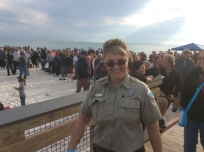 And then it was over and the crowd dispersed and a few of us hung back. The volunteers took down everything and then folks paused for a few more pictures and a few more interviews with the press were in order. And finally we left and went to celebrate with dinner at a local bar. It was a very fine day for turtles. GSML released a video linked below. Dick can be seen in the video. I am there too but only in a drone shot. Just as the last turtle left the non waterproof drone dunked in the water and was fried. GSML was talking about a new drone that was water proof but they still had this one and so it wasn’t really time to spend the money…..  Poor drone sat smoking on a picnic table as the crowds departed. Maybe it is time to buy that waterproof one that can take of and land on the sea. 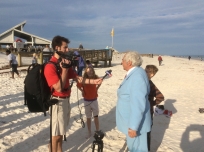 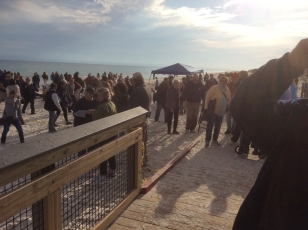 This will be one of my favourite memories of all time!

5 thoughts on “The Great Turtle Release”