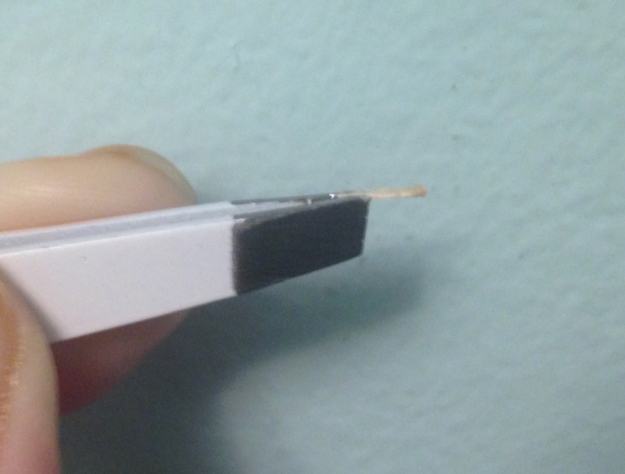 My life has been quiet in our little town. I haven’t had much to share. However I did have one experience that I think deserves sharing. A few days ago I was rototilling my garden in preparation for winter. I was pulling some large dead parsley plants up and I got a nasty sliver in my thumb. It hurt. I pulled it out but it kept on hurting.

I had three days of pain and misery that interfered with my sleep and the spot fussed and wept and pussed. I couldn’t see anything. I soaked the wound in salt water and I tried peroxide. Nothing helped but pain killers. I decided after the third night that if it wasn’t better by morning I would have to make a trip to a clinic and get a doctor to help. I couldn’t see anything but maybe I had an infection.

Just before I took a pain killer and went to bed, I tried a search on line and found a reference to using baking soda to remove slivers. The instructions are simple. Make a thick paste of the baking soda and water. Place this on the site of the sliver. Bandage loosely. Leave overnight.

The next morning I carefully removed the bandage and checked it. Nothing. I looked at the wound and saw something sticking up about 1.5mm (about 1/10th inch) from the wound. I used a tweezer to pull and to my astonishment a sliver nearly one centimetre long came out of the wound. The sliver was stuck in at 90 degrees to the skin and must have gone in to hit bone. It was also stiff and hard, almost as hard as wood. Because of the colour, I couldn’t see it in my skin. Because of the angle it went in, only the end was visible but it was far too deep to grab before the baking soda treatment. After I pulled the sliver out, I could see a hole in my thumb. No wonder it hurt!

The pain immediately eased up. Within a few hours the hole was closed. Now, two days later, the wound is almost healed. Anyway, that sliver was a very small thing on the scale of things we suffer with in life, but I think it worth sharing. The baking soda trick worked for me.