This stay illustrated why I HATE making reservations. We arrived at the Springhill campground and pulled into our site. On our trip we heard that there was going to be severe weather north and west of us. The system for reservations means you have book at least three days in advance. Three days ago there was no prediction of storms. I asked if we could stay on for two more days. I was told no because the site we were in was booked for the next two days after ours but the next one over was open. I had to come by Friday morning to register. The volunteers on duty did not have access to the computers and could not book us into that site. I asked the fellow next door and he said he planned on staying in his site for two more days because of the bad weather. The next campsite over was empty and marked “walk up, first come first serve”. We awoke early to a gorgeous dawn and we moved over to that empty campsite. I then drove my bike over to the office to pay. 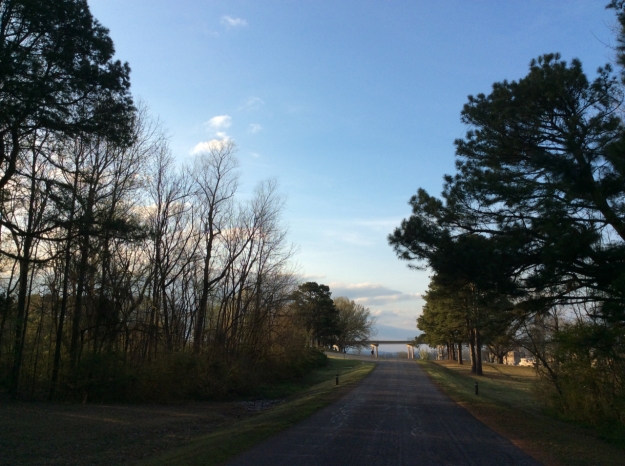 The view we drove into where our first campsite was.

Only two weeks ago at a different campground we had checked into the office first, paid for a nice site on the water, and then drove in to find someone already there. They had passed us while we were at the office. We returned to the office and were told, sorry, first on the site gets it. I got to the office here to discover that in this campground, it isn’t first on the site. It goes to whoever shows up first at the office! Another woman saw us move in so she went to the office immediately while we were moving and she waited to make sure she was first into the office by ten minutes. (I was third in line and waited outside the tiny office.) I was informed there was nothing that could be done about it. That woman had registered for the walk up site first so she got it. We had to move a second time. I could have taken the site of our next door neighbour because he hadn’t arrived yet to pay. I would never ever do that to someone else. I felt THAT was a despicable trick and a terrible thing to do. To say I was furious was an understatement. I drove my bike back and we moved again to the only free site, a narrow short site not on the water and far from any washroom or shower. This why I absolutely HATE making reservations. People play the system to make your life hard, the reservations force you onto someone else’s schedule, and then reservations rob you of the flexibility to stay on if the weather turns bad. We once had reservations and then a break down and we lost the cost of one night at a very expensive resort campground near Niagra Falls. We had to boondock outside the gate, because we arrived too late and they locked the gate, and in the morning they not only refused to give us a refund but wouldn’t even let us shower before we continued our trip because we were only booked for one night.

Flowers in the grass.

The third night at Springhill those severe storms rolled through from the southwest to the southeast exactly as predicted. We were safe in our third campsite. I fell asleep once the radar was clear, fantasizing about sneaking over in the thunderstorm and flattening all the tires on nasty woman’s fifth wheel. It was only a fantasy. In reality, I always leave such things to karma. It has yet to fail me. Besides, I am deathly afraid of storms and even if the severe stuff was past, there was still a lot of lightning. After the front went through, there was a harsh cold high wind and low temperatures the next day so except for one long walk and two short doggy walks, we stayed inside. I made a crock pot of Italian minestrone soup and some fresh buns. 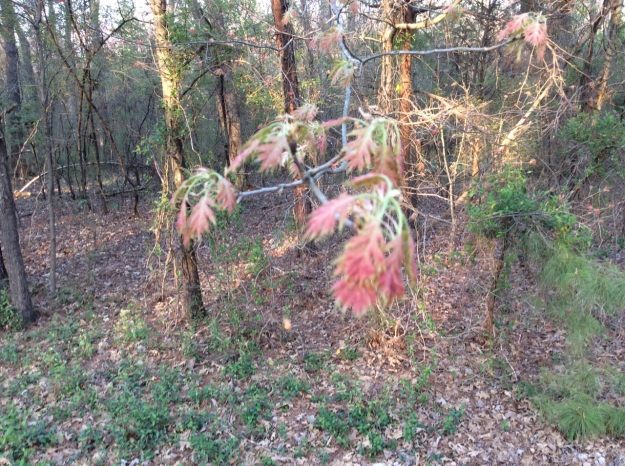 As always, karma came through for me. The people who had handled the reservations were just as bothered by the nasty woman’s treatment of us as I was. They stopped me and told me that the nasty woman had showed up again claiming I had taken revenge on her by deliberately leaving dog poop in the site. He went to investigate her complaint and discovered the poop was actually fresh Canada goose poop. Her husband had not noticed the goose poop on his shoes and tracked it all over the rugs inside their fancy fifth wheel. I felt much better about life after a few good snickers over that. We left Arkansas behind with some regret. It is a beautiful place and I will miss it and I hope my karma allows me to get back to Arkansas again. 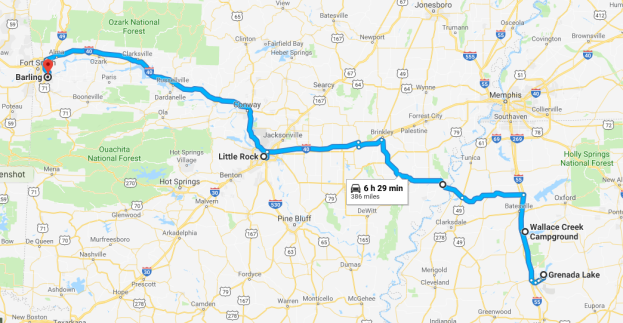 Map of our trek across Arkansas