Yesterday felt normal. That seems like a strange thing to say but all day yesterday I felt like life was as it should be and had been before the stroke. In fact, I didn’t think about the stroke even once during the day. I realized it as I fell asleep and I awoke contemplating how that happened. There are two main reasons. First it was cool and it rained off and on all day. It was also the Sabbath. A slow sleepy day of doing very little and relaxing and taking a long nap on such a day was entirely normal before the stroke and so the slow pace felt entirely normal yesterday.

The second reason is our new doctor told us to only do the blood pressure thing with the new monitor three days a week. We are to measure blood pressure morning and evening Monday, Wednesday and Friday. The blood pressure thing was what the doctors fussed so much about during and after the stroke. During the stroke his blood pressure had soared up to 220/180. The first twenty four hours after we got to the hospital he was hooked up to a monitor that sent telemetry to the ICU because whenever his blood pressure went over 180 on the top number they added drugs to his IV to bring it it down. For the first night they were giving him so much they were worried about accidentally stopping his heart. The blood pressure was the thing they continued to fuss over until he was released. It was such a relief when he got home that it went from 180ish to 140ish in 24 hours. (Hospitals are stressful places.) After the first two weeks and a change of one of the three blood pressure medications back to his old one, the one we knew worked, it dropped again to the 120ish range. Each time we take out the monitor it is a reminder of the events. When it reads as normal we have a sense of relief but there is still that reminder. Saturday we had no such reminder.

My husband is now back at his regular work although at half the pace. He has several collaborators from around the world. Many of them are students or junior professor types and some of them are from countries where the education is spotty or English is not the first language. Much of his time with them is spent doing things like explaining why you need a scale bar on a micrograph or how to better word an abstract for publication or how to write a grant. He also spends a lot of time converting the universal language of science, bad English, into native English (albeit American English.) It is not just junior people. He translates for scientists who are senior in ability and expertise to him in their fields with whom he collaborates. He does all this via Skype and Google Hang Outs and similar communication methods. Prior to the carotid artery dissection, he dedicated Mondays to collaborations and he would literally spend 12 hours giving each person one hour of undivided time. He has been having on line meetings with a few people this week where projects are urgent and his presence cannot wait and that has been going well, even at the slower pace. Tomorrow he begins his regular mentoring day once again. He has switched from one day of twelve, hour-long blocks, for two days of hour-long blocks interspersed all through Monday and Tuesday with down time in between. He will not get as much done of his own writing on Tuesday but he thinks he can handle the mentoring/collaboration this way even with the fatigue. He has warned everyone that if he gets too tired they will have reschedule. They are all being so supportive it is heartening.

We missed the wild Saskatoon berry picking season we always took in during previous years because of the stroke. To our delight and gratitude a group of young people in the community picked pails and pails of a bumper crop and shared with us. I made Saskatoon pie and it was heavenly. Even if there wasn’t enough to make jam it still felt so normal to eat Saskatoon pie in summer. Bless those kids. I’ll bet they have no idea how much they brightened up my special normal day with their small gesture of kindness. 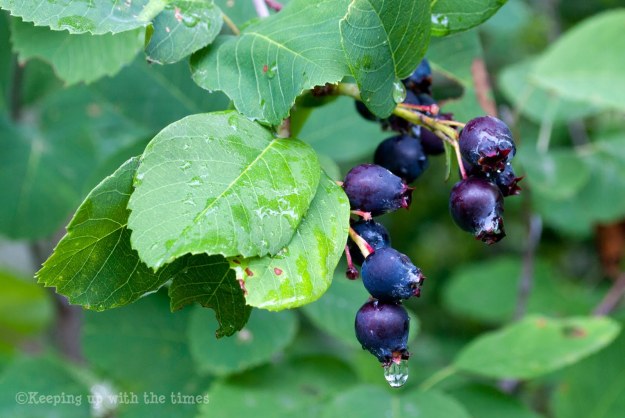 On the home front we have always split the household chores. He makes breakfast and I make supper. He does the laundry, I do the dishes. We share the lawn mowing. He has been too tired to do his share since we got home. Because it was raining and it was a slow sleepy day, it didn’t matter. He was able to do things indoor as he normally did before. He took a mere four naps/rests instead of the typical eight to ten he was doing. And we even managed to get a nice long walk with the dog in-between rain showers. I am hopeful this indicates an upward recovery trend. It felt so good to feel normal.