It’s been a very bad summer for gardening. Although we have had a few thunderstorms with down pours we have not had even one of those three day drizzling rains considered normal where we live. I have been watering but as any gardener will tell you, nothing works like rainwater and a heavy down pour of 15mm (6/10s”) in twenty minutes may fill a rain barrel but it won’t properly water anything. We also suffered a late frost in June that wiped out or damaged many of my bedding plants. The consequences for my garden have been profound.

Misty likes the rain and was playing in it until she spotted me with the camera.

My zucchini were nearly destroyed by the late frost and lack of rain. The result has been hardly any lovely garden zucchinis have come in but only stunted and thick skinned ones. The pepper plants have produced but they are stunted and super hot and have brown spots. Beans, usually I have so many I get sick of them, but this year we only got a few supplements for our dinner vegetables. I didn’t get any to freeze for later in the year. I had two plantings of corn and one has produced only a half dozen scrawny half cobs. I have already given up on the second planting and pulled up the stunted little plants that barely got tall enough to brush my hips as I pass. Some of them even developed corn smut and that was part of why I just gave up. Better to get rid of the diseased plants than hope they might make a cob or two before freeze up. Cucumbers? I had to replant them all after that late frost and so the possibility of pickling cukes was already set back. Add to that how even with daily watering they were often wilting, I have gotten exactly three and only three small jars put by. Potatoes don’t seem as dependent on rain as opposed to watering with well water and they are doing very well and have made nice big potatoes. My carrots and beets are tiny jokes compared to previous years. Tomatoes, my glory of the garden and our favourite thing to eat are down to less than one quarter of what I usually get. I have not done any canning of tomatoes and we are eating them as fast as they ripen. 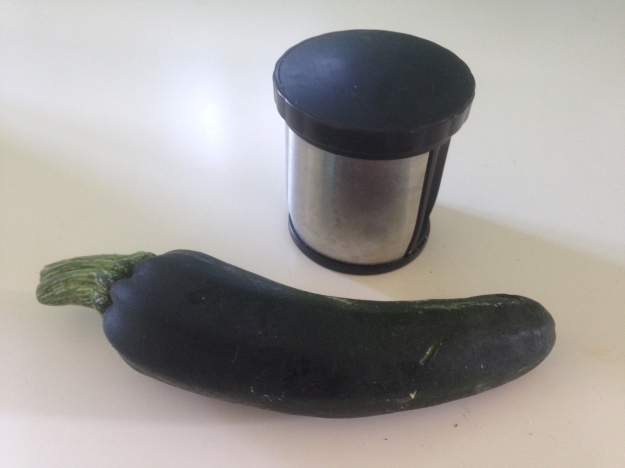 This pathetic looking zucchini is among the best I have gotten this year.

One good thing has been our grass has gone brown and dormant and crunches when you walk on it. You don’t need to mow crunchy grass. The native wildflowers, so much better adapted to take prairie drought, have been popping up above the crunchiness and since they aren’t being mowed, we are being treated to bright yellow and deep lavenders and fire engine reds. Our little garden pond has become a sanctuary for the birds and frogs in the area whose usual watering spots have dried up.

The cat hates the rain. After our drought he is the only one complaining.

I can be philosophical about the poor garden showing for a couple of reasons. When it comes to my homemade pickles, they keep for at least two years and 2018 and 2017 were good years with lots of fine pickles. We have barely finished with 2017 pickles and not started on 2018. We will be fine as long as next summer is a normal one even though I only made three jars of dills. The second reason is that we are not pioneers living miles from any other source of food. I can go to the grocery store and buy the produce my garden failed to produce this year. How awful a garden year like this must have been back in the days when one did not have a grocery store nearby and the means to buy from it. Without that grocery store this would be a hard winter of eating mostly potatoes.

The hardest thing about this drought has been the effect on the trees. My poor poor trees have been yellowing and dropping wilted curled up green leaves and generally looking miserable. Many younger trees have just given up and died. I have been faithfully watering my own trees but trees generally don’t like well water loaded with iron. A little iron is good, too much iron can be worse than none. One little weeping birch on public land was planted a couple of years ago. I happen to love weeping birch and the sapling’s distress was painful to see. It was going yellow and what leaves were still green were curling. I poured many buckets of well water on the poor little thing each day for weeks and the green leaves uncurled and lost their brittleness but the yellowing leaves dropped and fell off anyway. Other trees from that planting just died.

Finally, finally, finally we are having a proper rain. It began with thunderstorms Friday night and it has been raining off and on since then. We’ve had heavy down pours that filled my rain barrels and soaked everything. We are approaching three inches. Today is a long slow drizzle day, the most perfect kind of rain for a garden. The trees are so happy with the rain. They have greened up and lost their drooping look. The grass has lost its crunchiness and we have enough water now that there is even a trickle running in the ditch indicating the soil is becoming saturated at last. Maybe the drought is over. It didn’t end in time for my corn but my trees are safe. I might even get a few more pickles.

Thank you Master of the Universe when you send us rain in the proper amount in the proper season. Thank you for sending enough rain to save the poor trees this August.

It has been several days since we have seen any fresh northern pocket gopher activity. We tried live trapping. Failed. We tried the other kind of trap. The gophers jammed the device with a perfect sized rock and after we moved the trap to a new location and reset it, they moved the rock to the new location and recycled their tool. I have not seen northern pocket gophers on the list of animals that use tools but it is now clear to me that the list needs revision. Since we undertook our more recent biological warfare attack, I have not found a single fresh mound in the yard. I think we have finally found our solution. I thought I would share it with you since it is easy, cheap, environmentally safe, and apparently highly effective. I’m not sure about using our solution on large commercial scales but it is definitely something the average small gardener can do.

The gopher wars had been on going for weeks and the most recent mounds appeared in our tomatoes plants. In order to understand the ferocity of my husband’s response, you must understand he loves fresh garden tomatoes the way hobbits love mushrooms. Therefore, the threat to his beloved tomato plants required stern, harsh and immediate retaliation.

There were articles on line about using male coyote and fox urine crystals and spreading them around gopher holes. This apparently convinces the gophers that there are foxes or coyotes present and they leave and go elsewhere. If you have ever cleaned a bathroom shared with a man, you understand why they advertise male coyote or fox urine as particularly effective. The male urine crystals were available on Amazon for about $70 with shipping costs. I told my husband about the idea.

“There is no way I am paying $70 for male urine when I am on all these diuretics and producing vast quantities for free!” he emphatically replied.

Shortly thereafter, a jar appeared in the bathroom. He had apparently decided direct application might disturb the neighbours. He then began making trips out to the tomatoes plants with the full jar on a regular basis.

After the first hole got an application the gopher responded by not just plugging the hole, but also filling it with rocks. After the second application the response was to create a new hole and cover the previous hole with a six inch mound. I am guessing it took six inches to cover the smell. After the third application, carefully  poured into each apparent hole and over all mounds, all further gopher activity ceased. (This third application required more than one jar.) It’s been days now and we don’t see a sign of any gophers doing anything anywhere nearby. Hubby dearest applied a few more treatments just to be certain they were gone. He’s now back to flushing. Like most tough problems you need to find the right tool for the job. Apparently I just had to find the right kind of hose.

So there it is. Male urine doesn’t have to be restricted to coyotes and foxes to drive off northern pocket gophers. Happy gardening.