We knew the storm was coming. We knew it was going to be a bad one. We thought we were prepared. It was far worse than anyone thought it would be. I took a video from inside my front door once the storm started. I thought it was bad then. We were soon dealing with 100km/hr wind gusts (62mi/hr) and 100mm (4 inches) of water, mostly in the form of heavy wet snow. It was like a tropical storm with snow instead of rain. Being near to Lake Manitoba certainly didn’t help. Lake effect snow dramatically increased the amount of snow we saw. The flat open lake also meant those north winds came through unabated. It was brutal. We later learned that almost every power pole near the open water was knocked down.

At first it was kind of exciting and fun. When the very solid little house began making a heavy thump noise with the wind blasts, it stopped being fun. The power soon began flickering. It would go off and then come back on over and over again. We could tell the power would soon be going off for real soon so we got ready. I braved the blasting wind and got the generator out and set it up on the porch. Dick is not supposed to lift anything over 9 kilos (20 pounds) so meanwhile he went around unplugging appliances and moving as many things as possible onto one of three back up battery power systems with surge protectors. We fell asleep Friday night to the sound of the wind howling, and snow hitting the window.

Dick woke me just before 7:00am. The power had gone off at 5:24am. The basement was filling with water. We have a home low on the water table and for a few months each year we live with the sump pump kicking in as often as every hour or so to once or twice a week. During this long dry summer our basement dried out completely. Once the heavy fall rains hit with their multi day/multi inch soaking, the pump started going about every two hours. It was so wet that the Red River Floodway was opened for the first time in fall since they built it in the 60s and that was before the storm. Now with snow falling and temperatures running about freezing, the ground already saturated and more melting adding water each minute we had water was coming in at a steady trickle. We fired up the generator and the pump went to work. We had to keep the pump running at least once every hour or face basement flooding. Our sump pump system is dual pumps. If one broke down we had a back up. I took comfort from that but I worried about what would happen if the generator stopped working. Even as I thought that the generator died. It took me a while to figure out the cap has to be set to “open” so some air can get in to allow gas to drain down. I knew that but not having used the generator since the 2018 tornado I had to figure it out all over again.

Good thing we had our generator! (Note the chain and lock which turned out to be a good thing to have!) It worked just fine sitting on the deck by the back door. We made one mistake though. I thought we had about three days worth of fuel. I was wrong. We had only about 24 hours of steady running time. We began to worry about running out of gas and we cut down our time to once every two hours. We would empty the sump pit, let the fridge and freezer run until they stopped, run the space heater and make sure my cell phone and Dick’s iPad were charged up and then run the sump again and then shut down. This kept the house temperature at about 14C (57F) and the basement dry. We dressed in several layers and most important, our hats on. You lose the most heat from your head so a hat is an absolute necessity if you are trying to stay warm.

Initially we had internet but soon that was cut off. The local tower has propane back up for twelve hours but after that, the tower shuts down. Cell service vanished and then the land line was gone. It was scary. The roads were closed all over the province, travel not recommended and my truck was stuck in the garage. I worried a lot about what it would mean if Dick’s artery decided to blow during the storm. There was no way to call for help and no way to drive out. Fortunately he was perfectly fine. Even so, I went outside and shovelled off the front and back steps three times to keep them open. I wouldn’t let him do any shovelling. He did not endear himself to me by pointing out that I am also of an age to have a heart attack shovelling snow. Note to husbands, not something to say, ever! I did heed his words and took only small shovelfuls of the stuff. 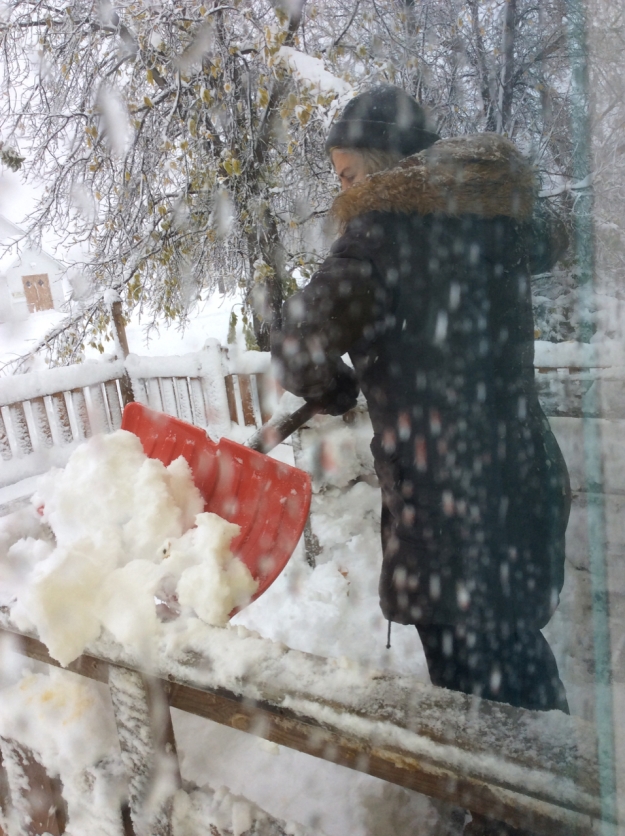 By Saturday midday the worst was over. By evening the snowplow made it through opening the highway. Shortly after that the two front end loaders that clean the town and work for the RM arrived to finish the job in the town proper. We took a walk to look for damage and we saw trees down. We watched the snow removal crews. The snow was so deep even the big front end loaders were getting stuck and having to rock their out of the deep stuff. We checked on our neighbours and they checked on us. Everyone was safe and had a way to keep warm. The snow had the strangest bluish tint to it. I have only seen that color in glaciers before. It was lovely and eery at the same time.

While we were out walking some strangers drove into town behind the plow. I saw a stranger go into our yard and stop and check out our deck. Good thing the generator was chained up! I had Misty with me so we raced home and the stranger saw me returning with the dog and he took off. I found out later that someone had stolen gas from a neighbour in town. Yes, it was an emergency. Yes, people needed help. However it is not right to just steal from your better prepared neighbours. I was glad I had my dog. She’s a sweet girl but she can look very intimidating. It seems when things go bad, bad people come out as well as the good ones. Was he up to no good or was he just curious? I’ll never know for sure.

That evening, we settled in happier because the snow had just about stopped even if the wind was still blasting us. I felt frustrated with the lack of power, cell phone service and land lines. We wondered what was going on in the rest of the world. I think Misty picked up on our concerns because she was both much more alert and much more demanding of our affection. Between puppy hugs, I got to finish a novel. I started on the crewel embroidery picture I bought over the summer to have something to do with my hands just in case we had a storm. The cat was also unusually grumpy and demanding. The house was cold so that night he slept under the covers in my bed snuggled up against my backside.

Sunday morning we got up to find we still had no power. Even in the tornado of 2018 we had not gone without power for as long. Through the night we had taken turns starting up the generator and running the sump pump. The house was cold when we got up and we felt miserable because we hadn’t showered in two days. With the generator we were able to have a hot breakfast with hot tea and coffee and that helped a lot. We then went out to join our neighbours as they started the clean up. Was there a lot of clean up!

First thing was to get the truck out. It was Canadian Thanksgiving and I was supposed to meet my children and grandchildren at one of my sons’ homes and bring the turkey. My husband said we wouldn’t make it. I got my little electric snow blower to work off the generator and I cleared the drive. The Snow Joe is a brand new toy I had only got on the  previous Friday. I was very happy with how well it worked. Just before we left, we gave the last of our gas to our neighbours who had run out.

We left for Neepawa and we had our Thanksgiving dinner. We also showered and got cleaned up while the turkey roasted. We bought two 20L jugs for gas and refilled our four 5L jugs and all the jugs the neighbours sent with us. As it turned out, the gas refills could have waited. The power came on just before we got home. Life is returning to normal now. The power is on. The house is warm. Cell phone service (which was never great to start with) is back to its semi reliable state. My landline makes a comforting dial tone when I pick up the handset. A few hours after that, the internet came back. As of this writing, some 18,271 homes are still without power. Crews from Saskatchewan, Ontario and our American neighbours in Minnesota are pitching in to help with the reconnection. 145 homes in the Rural Municipality of Alonsa, my neighbours, are still in the black.

I learned some important lessons getting through this storm. Mostly we did very well but we did learn of a few holes in our survival plans. We need a lot more gas than I estimated. We weren’t the only ones who got caught without enough gas. Our little space heater is just enough in around freezing weather. For anything colder we will need to have that wood stove burning. We will be bringing in some wood and kindling and collecting newspaper and have the stove cleared and ready to be reattached and start burning now, not before we need it. We ran out of water and if the sump hole hadn’t been filling would have had a problem. As it was, we had no lack of water for the toilet but in winter the water doesn’t run. We also have to be wary of strangers. Some are up to no good. However most people are good. And the real heroes are the people who run the snowplows and get out there to fix those downed utility lines and clear the highways in terrible storms. There are crews of them who are being fed at our town’s senior centre with the kitchen. I have volunteered to help feed these heroes tomorrow. It’s the least I can do.

Update: In spite of the apparent ferocity of this particular storm it turned out to not be a record breaker for our area. Storms with higher winds and more snow have occurred in 1947 and three times in the 1960s. There have probably been other more severe storms prior to that that didn’t make it into the weather records because Manitoba was not really settled by White record keepers until the 1900s. This makes it all the more important to be prepared for extreme weather events because Manitoba is a place of extreme weather, especially extreme winter weather.