Large lot and lovely view over the lake. What a great place to stop for Passover! 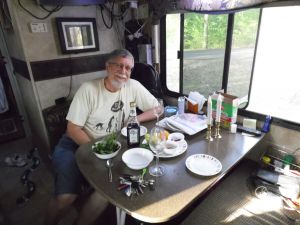 We had a full Seder with all the trimmings even if it was just the two of us. 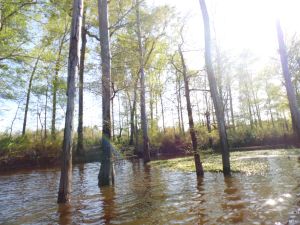 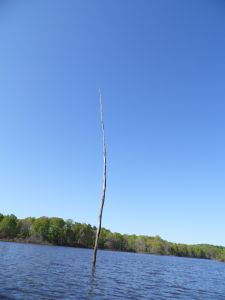 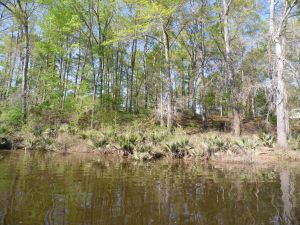 We went canoeing the second day in the afternoon.

We had a lovely time! And for $11/night can you get any better than that?

So we are in Milledgeville Georgia in our favourite campground on the riverside. It’s actually chilly because the whole polar vortex/former pacific hurricane has caught up with us but it has been considerably moderated traveling over the continent to where we are. The high today is forecast to be 54F/12C. Sweater weather. Our trip from Alabama to Georgia was interesting. What struck me was as soon as we crossed the border we began seeing pillars, arches and artwork. This is not to say that we did not see such things in northern Alabama, but Georgia clearly takes special pride in the their pursuit of neoclassical architectural highlights. Even the poorest trailer park had porches with Greekish pillars.

Last night we attended a play put on by the local society. It is comedy set in Tennessee, a traveling singing family, and most of the jokes centred around how uncultured but musical the good mountain people are. There was also a lot of warm fuzzy, “we are all Americans in this together” stuff too. And of course endless bible quotes and talk of Jesus. There was a medley of Christmas around the world that was hilarious because it was so appallingly ignorant that even the Americans understood it was a parody of the widespread ignorance of the outside world Americans are famous for. A people who can make fun of themselves will never do poorly.

The church was lined with historical photography and I was looking at the pictures during intermission and a local woman approached. She proudly told me she had been born and raised here. She asked me for my impressions and I commented on all the pillars. She went on to give me a detailed explanation about how every town of any note in Georgia has a distinctive form of this architectural highlight.

Milledgeville has the distinction of combining Doric columns with Iconic scrollwork. I wondered if the Greeks would approve. She then went on to describe three other towns’ inferior distinctive style in terminology I had only the vaguest awareness of.

She apologized about the cold and I remarked how my husband and I had gone for a walk the night before because the air was so fresh and lovely. I did not mention how much we felt we needed that walk after a typical deep fried everything dinner. We actually took food home there was so much, and we were so stuffed. When I say deep fried everything I am not kidding. Even the pickles were deep fried.

She laughed, delighted with this example of northern hardiness. She was suitably impressed with Canadian tolerance of cold since, as far as she was concerned, the evening before had been so cold as to be unfit for man or beast. She then made this funny wistful comment about how fragile southerners must seem to me. I replied with what has become a standard reply for me. It invariably delights southerners.

“Yes, but in Canada as soon as the temperature goes above 80F [27C] people begin to wilt and the radio and TV have warnings on how to avoid heat stroke, so it is all what you are used to.”

By then we were part of a group as several more of these aging Southern Belles had joined our circle and my comment brought delighted twitters about the poor fragile northerners.

They asked what part of Canada I was from and I said Winnipeg. That brought the usual blank stares. I added north of North Dakota. I saw a slight reduction in number of blank faces. One of the women commented about how her next door neighbour, one of the university people, was from up north as well, somewhere in Ohio. They took me to the refreshment table and I asked what a particular funny looking cookie was and they tittered again and told me it was a “corn wire” cookie, a southern delicacy. I purchased one to help support their theatre group and tasted it. Corn, salt, sweet and American processed cheese, deep fried to fluffy flakes. Ah yes, the south, land of the extra wide rocking chairs. They were delighted as I exclaimed how good the cookie was while I worried how many calories that one cookie meant. I actually detest American processed cheese but the cookie was salty enough I could barely taste the cheese. As I ate the cookie, I got many more lessons in the wonders of the illustrious history of Milledgeville, which has been present since Georgia was first settled by Europeans, and how it was once the capital of Georgia. I didn’t bring up the Africans by whose forced labor much of this settlement occurred. That was over a hundred years ago and really shouldn’t matter anymore. I looked around and there was not one black face in the audience so although one can see many blacks among the “university people”, in the stores and in restaurants you are as likely to be served by a black as a white, some separations remain here in the south. Such separation are the exceptions now, and not the rule and their bastions are aging. I saw almost no young people, except for a few grandchildren accompanying a family member, and the median age of the players was above my own. All the more reason to not bring up the past in this polite and charming company.

Overall I must say I do love Georgia. I wish we could stay longer. But I’ll skip the heat though. Manitoba summers are hot enough.

I am including some pictures of a particularly stunning bit of Georgian art we came across on our trip. It is family watching murmuration represented by a twirling wind chime decorated with metal birds. I was stunned by the beauty and joyousness of the piece set in a park with multiple columns (not pillars). 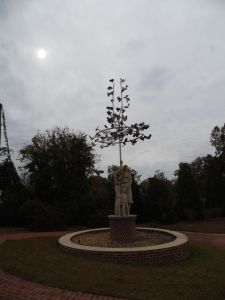 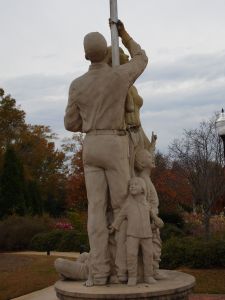 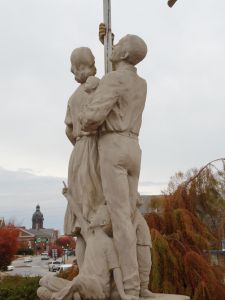 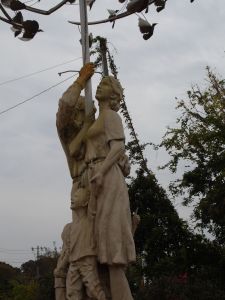 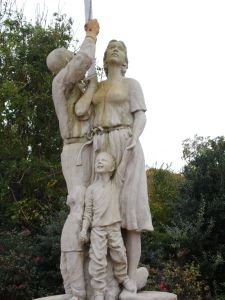 Noccalula Falls is located in Gadsden and we stopped in here. This is one of those “wonders” which everyone is supposed to see on the one wonder per state list. Again the same cavern underneath the falls, the same general shape but this one was easily the highest and biggest of all the ones we saw. There is the inevitable legend of the Indian princess who leaps from the falls into the water to avoid a marriage she can’t stand. What was interesting is this legend is supposedly true. The Cherokee were forced eastward and were crowding and fighting with the Creek so the wedding was to make peace. She jumped instead. The statue has a maiden ugly enough that it should have been the Creek warrior she was betrothed to who would have been the one jumping. No matter. The park is lovely and has a campground. The problem is they were all closed up for their break between Halloween and the preparations for their Christmas festival so we could only see the falls and then leave. The cold arctic air has arrived and after days of T shirt weather we had to bundle up warmly. We will spend the night in Oxford and move along to Milledgeville Georgia in the morning.

We spent the night in Desoto State Park. This is a large park near the falls. It has it’s own multiple waterfalls. We went to see all the close by waterfalls. After a day of walking the Cathedral Cavern we weren’t going to try walking miles and miles to see all the falls. In Desoto State Park we visited the Azalea falls, the Indian Falls and Lodge Falls. Lodge falls was just a trifle. 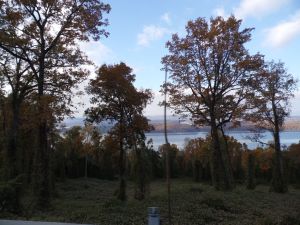 The State Park is up high on the Tennessee Hills plateau. The ride was up long and slow to spare our transmission. At the top the foliage was in full fall glory and a pleasure to see.

Indian Falls from the top. 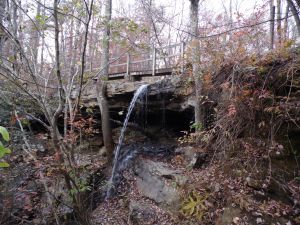 Indian falls from below. All the waterfalls here have this characteristic cave underneath. 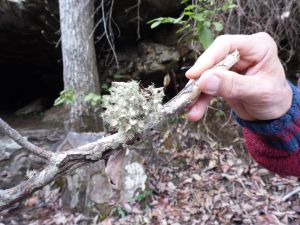 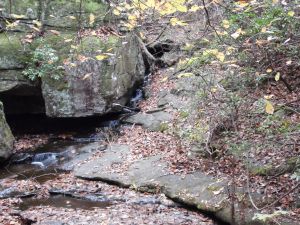 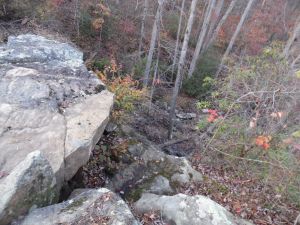 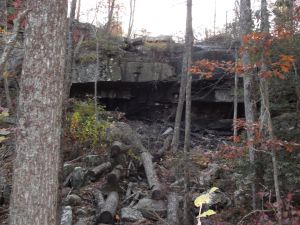