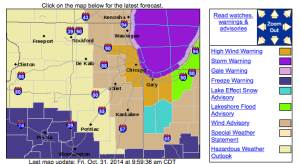 Oh wow! First there was the Colorado low, then the Alberta clipper and now…wait for it….The Manitoba Mauler.

***Major trough setting up over the Eastern U.S.***

The weather pattern will get interesting as we head into the weekend as a
Manitoba mauler (a low pressure system coming from the Canadian province
of Manitoba) dives southward towards the southern Appalachians by Saturday
morning. This will result in the development of a highly amplified trough
over the East Coast and a strong surface low developing offshore. In
terms of sensible weather impacts, expect much colder weather by Saturday
with numerous showers, and accumulating snow in the higher elevations of
the Appalachians. Rain and windy conditions are likely for eastern New
England by Sunday as the offshore low intensifies.

Manitoba Mauler – how appropriate! Since Manitoba is flat and opens right up to the Arctic, a Manitoba Mauler is a cold front that quickly brings arctic air south and east pulverizing the eastern midwest of the USA. Today we have very high winds, freeze warnings, a high barely above freezing and a low predicted for about -3C, below freezing. It will take two days to pass and will officially end the growing season down here in southern Illinois. We caught up with fall on the trip here and saw many trees in brightly coloured autumn dressing.

We are safely tucked in at a full service campsite just north of Champaign called D&W Campground and RV park and it’s really a nice little place to sit out horrible weather. Super wide sites, friendly people, all the amenities. I plan on doing some vegging out, some writing and today make stew and bread. We’ll wait out the Manitoba mauler in Champaign, Illinois.