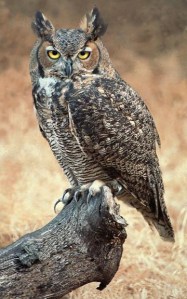 I almost entitled this adventures in being a campground host but fortunately it wasn’t us. We got back from town after purchasing a box of mothballs to sprinkle around on the gravel under the trailer. Experience has taught me that skunks hate the smell of mothballs and will move out of any space with mothballs in it quick march. I did learn why last night’s horrific skunk odour came about. It seems a nice family of Mama Skunk and her six baby skunks decided to help themselves to the nice treat left in the garbage bags in the dining tent attached to a tent trailer where a human mom, dad and their three offspring were spending night number two of their three week camping vacation. As luck would have it, a passing great horned owl noted the family of skunks.

Now great horned owls like to hunt and eat an assortment of rodent type creatures and because they are lacking a sense of smell, skunks can figure predominantly in their diet when available. The owl decided to help himself to a nice baby skunk and swooped down. Baby skunk ducked inside the open tent door crying for mama and the owl followed. The human family was awoken to the screams of an owl fighting with a skunk in their dining tent.

Skunks are fat and slow moving because they have the ultimate for of biological warfare from where they get their latin name Mephitis mephitis of stinkiest of the stinky. At some point the owl triumphed over the skunk and left carrying a nice fat mama skunk no doubt oblivious to the havoc wrecked on the noses of everyone else within a kilometre of the dining tent. The six distressed orphans scattered about the campground, spraying as they ran. One apparently took refuge somewhere near our trailer last night. The dining tent was also lost in the battle, unfortunate collateral damage. I suspect the tent trailer might be a total loss as well, although it is possible a few years of being open in sunlight and fresh air might remove the odour enough to make the tent trailer usable again. In the meantime if anyone knows of someone with anosmia, they may be able to pick up a tent trailer really cheap. Park patrol was called by the weepy eyed gagging neighbours and it was immediately agreed upon by all that it would be best to provide the unfortunate family with a full refund and escort them out of the park as fast as humanly possible, hopefully from a safe distance upwind.

It could have been a lot worse of course. This was just stuff damaged and the family might even be able to laugh about and tell jokes about the great skunk camping adventure once the stench has faded. What if it had been a hungry bear who decided to go looking in the tent trailer for more? The moral of the story is that when we campground hosts, park rangers and interpreters tell you not to leave garbage in your dining tent, we are not just doing it because we are neat freaks without anything real to do on the job. We honestly do have your best interests at heart.