We ended up spending a week in the Army Corp of Engineer’s North Abutment (Grenada Lake) Campground. We initially pulled in for three nights but we were concerned about the news coming out of Nebraska. As we watched one heartbreaking report after of Nebraska flooding another the thing that really stood out was that I-29, the main highway we take to go home, was closed. Between us and our location in central/west Mississippi was the Missouri. The flooding Missouri was blocking our trip home. We discussed it at length and spoke to our dear friend who minds our house and we decided to play it safe extend our trip. By staying south a few days more we could avoid the mess up north and avoid becoming part of their problems. 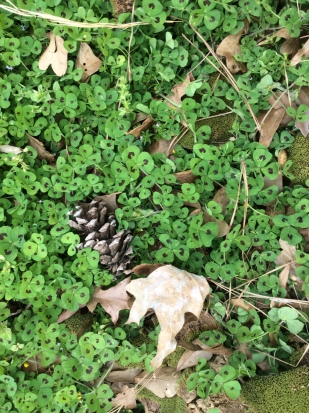 Dick was fascinated b y this clover.

Another walk with Dick and Misty

The campground had three loops to walk.

Here we are out walking again. 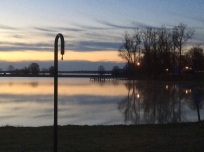 Sunset at our first site.

After our first three nights we moved to a full hookup site for four more nights giving us a full week on Grenada Lake. The weather was sunny and cool. We had several days of brisk winds that stirred up the lake turning the water to brown. Even so we were able to go for nice long walks in the sunshine, ride our bikes around the campground and relax. Once nice thing was the cooler weather meant an end to the horrid biting bugs that had left me covered with welts in Alabama. It was blessedly stable uneventful weather after dodging tornados in Alabama. We made one trip into Grenada to see the historic mainstreet (which was not work the trip except for a neat local grocery store full of all kinds of fascinating stuff like pickled whole pig’s feet). Again, we were delighted by wildflowers, migrating songbirds, egrets and herons and for some reason more turtles than I have ever seen in one place. Somehow we never did get a picture of the turtles but we saw them sunning everywhere. I wish I could adequately describe how soul refreshing it is to stay in such a lovely location and enjoy such absolutely perfect weather with no pressure to be anywhere or do anything. I even baked bagels and pumpernickel bread one day it was so relaxed.

On our second night we were alarmed to note that the road on top of the dam was closed because of how high the water in Grenada Lake was. The local authorities were running golf carts up and down around the clock watching for leaks in case the levee broke. The locals did not seem concerned and our campsite was above the levee so we decided to stop worrying too and that was when I baked. On our last day, the wind finally calmed and we went for a long overdue canoe ride. The lake was twenty feet above flood stage. There was a small creek and the forest around it totally inundated. We were actually able to canoe into the forest and see tree tops of shorter trees and get far up the trunks of mighty evergreens. That was a really interesting perspective.

Our reservations were up and it was a really busy looking for the weekend at this campground. We had already decided to alter our trip home by going through the Arkansas’s I-40 interstate following the non flooding Arkansas river. That about the flattest road in mountainous Arkansas. We planned on exploring some of the many Federal campgrounds along that route. We could then avoid the lower Missouri flooding which was now moving out of Nebraska and towards Mississippi right through our original planned route home. We were pleased to read that the I-29 was now mostly openly and if we took our time, it would hopefully be clear for us to drive home.  Those Arkansas campgrounds were really busy because they were all booked up for the weekend. We made reservations for the trip through Arkansas but we were still left with three nights in Mississippi before we could take advantage of the reservations. We decided to move north again and stop for three nights near Memphis Tennessee at the Army Corp of Engineer’s Enid Lake campground. And so we said goodbye to Grenada Lake and headed north.

Misty had great fun with a friend she made at our second campsite. This little guy was actually faster than her. We don’t meet a lot of dogs who can outrun her but this boy sure could.