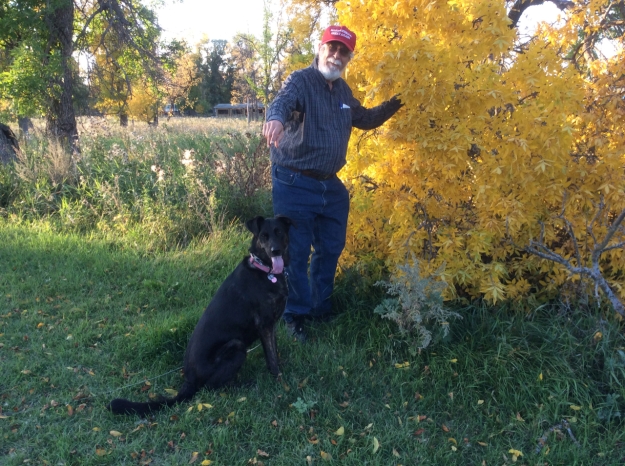 We got so so news. The assessment required we drive two hours and fifteen minutes to Brandon. We left on a Sunday and he had a CT Monday morning and we saw the neurologist on Tuesday morning. We turned it into a camping trip with several lovely walks in the country enjoying the fall colours. Manitoba turns gold in September. We also had one of those strange summer day spells that often happen in September so the daily highs reached 30C (86F). Things are back down to more normal cool now but we enjoyed that brief return of summer. It was altogether a very nice interlude in spite of the stress but even so we were both feeling a lot of stress.

The artery in Dick’s neck is still open, “patent” as they say. However, the tear is not healing properly and has actually gotten a bit worse. The neurologist thinks maybe an accident he had in midsummer when he ended up with whiplash likely caused the increased damage but the blood thinners protected him from having another stroke. We are being referred to an interventionalist radiologist to see if he is a candidate for a stent. Dick and I are inclined to wait since these arteries will take 3 to 6 months to heal anyway and it is only just 3 months since it happened and five weeks since the whip lash. (Our dog was playing with another dog and both dogs smashed in to him nearly knocked him over. He later developed such horrific neck muscle spasms we were off to the ER where he was diagnosed after many tests with whiplash. The ER doctor thought the neck muscle spasms might be due to the atorvastatin (Lipitor) but said we should not stop taking it without the specialist saying so.) Plus the proposed stent is low but not zero risk itself and the standard is only put in a stent if the patient is symptomatic and Dick is not symptomatic.

Given the Canadian health care system, it will be at least several more months until he gets in to have a consult. Our friend across the street has an uncle who is on a waiting list for a consult about a stent. It was nine months ago that he was referred and he’s still waiting. Of course, the uncle is 86 and also has multiple health problems, diabetes and kidney failure and he’s likely to die soon anyway no matter what the doctors do for him so he would rank very low on the list for getting a stent. Dick’s situation might be considered more urgent and likely to save the system health care dollars so he might get higher in the que. Of course, if Dick has a massive stroke and dropped dead he’d really save the system a lot of money and being he is nearing 76 so who knows how long we will wait. The wait lists aren’t supposed to work that way but we all know they often do.

On the post carotid artery symptoms front, Dick is doing remarkably well. The sudden fatigue is mostly gone which is a real blessing. The other nice thing is the specialist said we can stop the atorvastatin. He was put on atorvastatin not because he has high cholesterol, but because the drug supposedly has some anti-inflammatory properties that apparently help healing. (I could not find any reference on that so I assume that is an off label use experienced physicians learn.) However, 20% of the population can’t tolerate atorvastatin and it has a lot of nasty side effects even in those who can and many doctors are questioning its usefulness. Dick was having to cope with terrible pain from near constant cramping of his muscles, especially his thighs, calves and back. I had extreme doubts about the atorvastatin given the side effects. We could not get the local doctors to listen to my concerns because they all deferred to the specialist and they would only change the meds if the specialist said it was okay and we had a specialist appointment in September. There is no way to get in sooner if it is a nonemergency. Put up and shut up and wait.

The neurologist got very angry with me. I asked him how long I should wait to hear about the referral before assuming the paperwork got lost (a fairly common event in Canada in my experience) and he got very angry and told me I had to trust him and if I didn’t trust him I was free to go find another neurologist. I got a lecture about the importance of trusting. That is a threat because there are very few neurologists in Manitoba and he’s the only one in our area. I was taken aback by him reacting to this simple administrative question as a gross personal insult. In order to try move things back to a more professional conversation, I let him finish his little lecture and then I told him I worked at Health Sciences Centre for more than a decade and my comment had nothing to do with him. This stuff happens even with the very best doctors. I am just trying to be proactive. He backed off and seemed mollified. I didn’t say this part but if I had been back at HSC with the authority I used to have, I would also have told him threatening a patient like that is unprofessional and he should consider taking a day off since he’s obviously been working too hard. If neurologists grew on trees out here, I probably would change doctors. Since he was really wonderful during the crisis, and he’s hard to replace, I am just going to assume he was having a bad day instead. Maybe one of his favourite patients died or something. I have no doubts about his skills as a neurologist but his office manner sure left a lot to be desired. Admittedly I can be grating and come on strong and I don’t automatically treat all doctors with the deference and respect some of them think they are due simply by virtue of being doctors so maybe I asked for it.

Anyway it is frustrating and disappointing to hear Dick is still walking around with a fragile artery that could blow and cause him a major stroke or kill him at any moment, or that it might just heal up and be fine given more time and there is no way to know what the truth is. I did not get a chance to ask about the other side effects he is having which I think are related to the three blood pressure meds. We got to discuss only the atorvastatin. We were rushed out of the office in under ten minutes after nearly an hour of waiting because Almighty Doctor was running behind. We did not get to hear the blood test results and the doctor did no physical exam. He just took our word that neurologically Dick is better. I realized that after we got to the parking lot and that bugged me a lot too.

I think the three meds my husband is on for his blood pressure are pulling my husband’s blood pressure down too low. Dick is having bouts of such low blood pressure he gets light headed and nearly faints. The monitor shows him occasionally dropping as low as 100/60. I think all the drugs he is on are having other effects as well such as he is really prone to dehydration with the tiniest amount of heat or exertion. Yet I lack the expertise to say, screw it, we’re changing the meds ourselves. We go back to our family doctor next week and I intend to bring that problem with the blood pressure meds up again. Granted all the bad side effects have been linked to atorvastatin in the literature I read on the drug so maybe getting rid of the atorvastatin is enough. That may be why the doctor simply refused to discuss the other meds. He could have said so if that is what he was thinking. We have one week to assess that for ourselves.

It is SO frustrating to me to think my husband is being over medicated and suffering side effects that are ruining his quality of life which he shouldn’t have to put up with when it might be each day is a precious gift to enjoy before he drops dead. On the other hand, I don’t want to do anything to make it more likely he drops dead. My retired nurse friend says I read too much and I should act stupid and slow around doctors. They treat you better when you act that way. She’s right, but can you see my eyes rolling so far back in my head I can see last May?

So that’s our latest update. Symptomatically Hubby Dearest is better. Artery healing wise he is a little bit worse. Nothing has changed except we are rid of one drug and he’s already had a remarkable improvement in how he feels even just two days off the atorvastatin. So we wait. I probably will have a lot to discuss with our family doctor next week. Hopefully I won’t be give a lecture about trusting doctors again.