I finished recounting our trip home. We are now comfortably settled in our little house on the prairie and I am back to being a retired stay at home grandma type. So until next trip, my posts will reflect that part of my life. We live simply and frugally.

As a society we have become more and more dependant on Big Food to provide us with ready made meals. There is absolutely nothing wrong with this. Moms these days often have two or three jobs including raising children. There is nothing wrong with trading a little money for some convenience and time. The problem is sometimes the skills we once learned from our mothers and grandmothers get lost. So this blog is for the young woman I met in the store who was buying cut up chicken and soup base and complaining to me that she just couldn’t get soup and stew to turn out like her Grandma made it and it was costing her a fortune. My recipe is for two-three people using a small crock pot so if you have a bigger family you may want to increase the size.

Step one is the chicken parts. I buy whole fresh chickens and cut them up myself. This works for us because my husband likes dark meat and I like light meat so very little is wasted. I prepare packages of half a breast and a thigh and leg in small packets and freeze them. If the “three-fresh-chicken” packs are on sale, I’ll buy those. I will put all the wings in one bag and we will have hot wings one night. In this case, single chickens were on sale and only one was left at the store. After I cut up the chicken I ended up with the back, ribs and wings in one packet. If you don’t buy whole chicken you could use any chicken parts. Back and ribs typically sell for very cheap.

Broth base requires not just chicken but some vegetable and herbs. I root around in my fridge and find whatever I can that is older. In this case I used grated carrot, chopped onions, and some herbs from my freezer. Each year I “put by” celery, cilantro, parsley and young greens from thinning garden rows. I simply wash them thoroughly, drain the water, and put them on a cookie sheet and freeze them. I then put the frozen herbs in freezer backs, loose pack. I can them use them for cooking. The green in this picture are celery leaves, turnip greens and parsley. I like the grated carrot because not only does it give a nice flavour, the carotene adds a nice rich colour. You can use fresh celery and/or dried herbs instead.

This step is one that requires patience and oil. The whole thing has to gently fry in order to brown the chicken and the vegetables. This step can’t be rushed. If you have the heat to high it will be burn instead of brown. If you don’t do it for long enough, you won’t get the essential brownings that are the real base of the broth. I tend to put this to brown and do the dishes and tidy up the kitchen, pausing to stir it around as it browns. It may need a little more vegetable oil depending on how fatty your chicken it. In this image you see browning about half done. it should take 30 minutes to get the chicken browned and the vegetables cooked.

I like to do anything that requires a long slow cooking in my crock pot. It saves power and looks neat and the inner crock can go right on the table as a serving dish. When the browning is done, everything goes into the crock pot. I also add a dash of salt and a teaspoon of sugar. Adding the salt and sugar chances the osmolarity of the water during cooking so that juices are drawn out and shared in the broth. I know everything these days is about the dangers of salt and sugar, but honestly, it just tastes so much better and we eat very low salt generally so the extra favour is worth it, especially compared to the amount of salt in a typical purchased can of broth. If you like things like pearl barley or lentils and beans that are dried, this is where you would add them. 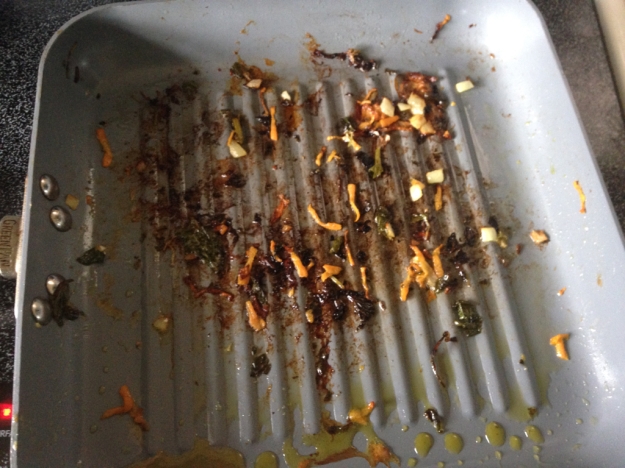 The next step both enriches the broth and saves time with the crock pot. One of things that drives me bonkers about the crock pot is that it takes forever to heat up. This means if I don’t get around to getting the soup on until after lunch it won’t have enough cooking time. This step gives me a little more flexibility in addition to flavour. I used a nonstick pan to brown but I still have a sticky mess in the bottom of the pan. So I add just enough water to cover.

I bring the liquid up to a boil. I scrape the simmering water and the brown stuff comes up. I then dump this hot water with the pan leavings into the crock pot. I repeat this until the pan is almost clean and there is enough liquid in the pot to continue simmering. Because the water goes into the pot already hot, the crock pot doesn’t take hours to heat. Plus the pan goes into the dishwater practically already clean.

The last step is to boil some water in the kettle and top up the whole pile in the crock pot with boiling water. I then let the broth simmer until the chicken is falling apart. Depending on your crock pot and how much you started with, your time will vary. In my small crock pot, and starting with hot water, it takes about two hours on high or five to six hours on low setting. Once the chicken is falling apart, I lift out the pieces of chicken with a slotted spoon and separate meat from bones. The meat goes back into the pot and I discard the bones.

The broth can be home canned or frozen at this point, if you want to use it for later.

Using the broth for soup:

Using the broth for stew:

To turn the broth into a thick stew you need to add about a quarter cup of flour mixed with a cup of cold water. I put flour and water in a jar and shake well before adding. Let it come back to a simmer and it will thicken. You can top it with dumplings.

Using the broth for chowder:

To make a rich chowder, add finely grated potato with the cut up vegetables and let it come back to a boil.

This recipe also works for fish. When I buy fish I have the fish monger fillet it for me but I ask to keep the bones, skin and head and use this same technique to make fish chowder.

Comments? Can I improve? Do you do something similar? Do you have any tips for me? I would love to hear from you.