I am a weather fanatic. I freely admit. I have been as long as I can remember. Tornado and severe thunderstorms are kind of my ultimate weather fear and thrill. So last night was one fantastic terrifying experience.

Early in the day NOAA released one of their charts with a big red bull’s eye and our winter parking spot was on the boundary of the red zone. The last time we saw one of those was back on May 2011 when we spent 6 hours in a tornado shelter in Lexington Kentucky. That was the same day Joplin got flattened. We were on alert. We went out for dinner and our waitress told us that school was being cancelled the next day due to the forecast. That was pretty shocking. Schools closed due to a possible tornado event? The locals were worried and one absolute rule we have with severe weather is if the locals worry then you should worry too. As we were getting ready to retire for the night we checked the NOAA site and found that Pensacola was under a tornado warning. There was also a report about a tornado having hit an RV park. It is a horrible eery awful sensation to look at the red on the map and know people may be dying at that moment.

We decided we would prepare for the worst. We checked out the nearby study building with a washroom, concrete walls and  reinforced roof designed to withstand hurricanes we had previously chosen as our safest place. We covered windows that might be problematic with cushions and got the shower stall ready complete with mattresses and quilts to put over our heads. I really really really missed my nice sturdy basement shelter back home.

We couldn’t sleep so we both decided to stay up and work while watching the radar. Time and again we saw severe storm warnings with red tornado warnings popping up. The weather people always sound alarmed but this was alarmed and grave, meaning bad. At about 4:00am I saw a large storm heading our way from the ocean. I told hubby dearest we would have to move to our sheltering spot soon. He began preps for trouble. About five minutes later the severe thunderstorm warning went up and we headed to the bathroom. Normally a severe thunderstorm warning by itself is not enough to send us to shelter but there had been many examples of these severe cells sending down tornados with almost no warning I could see on the radar and it just seemed better to not take a chance.

The storm cell took about fifteen minute to pass over and two more came right behind it. Each one brought lots of lightning and pouring rain but thunder was distant and muffled. We had one spell of horizontal rain that lasted about two minutes but no other danger signs. We never actually moved into the bathroom although we were right beside it. As the storm cells moved on shore there was an obvious weakening and  the radar showed no rotation and we felt it was fine to simply be near safety.

By about 5:00am it was pretty much over. The storm system had passed us by with no damage. The ground was wet when we went back to our trailer and finally went to sleep. I mumbled about how we had really wasted our time worrying about the tornado and staying up. Hubby dearest strongly disagreed. This time nothing came our way. If we get careless or complacent next time might not be so lucky.

Today we learned a long track EF3 hit Pensacola destroying almost 100 homes. Another tornado destroyed an RV campground in the town of Convent, in southern Louisiana and killed two people and injured 31 people. It was a strong graphic reminder of how RVs are not a good place to be in tornado weather.Tonight I am heading to bed grateful for a tornado free night to catch up on my sleep.

I hope the folks hit by this tornado outbreak all make a full recovery of home and health. My condolences to the family who lost loved ones. That could have been us. 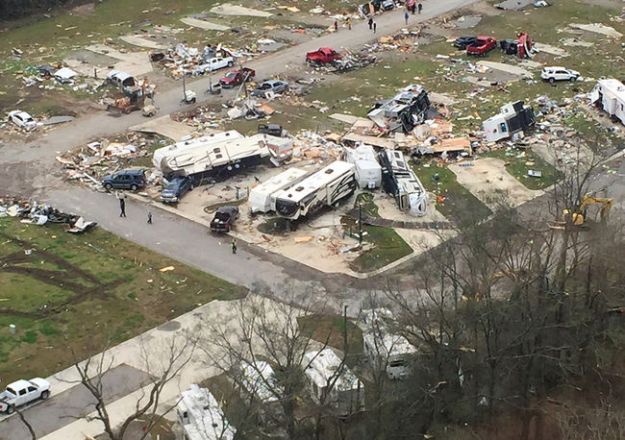 Associated Press picture of the Convent RV Park in Louisiana after it was hit by a tornado.

Today’s forecast is for a moderate probability of strong thunderstorms including tornadoes. Storm chasers have taken up positions to the south west and south east of us. The arrival of professional storm chasers is always an ominous sign. I fretted and fretted about using the line of credit as I hate having any debt, but after the forecast yesterday, we decided to go out and buy enough plywood to give the shelter one layer. There is frugal and then there is penny wise and pound foolish. A pleasant surprise was finding out our little local lumber store in Glenella has prices that match Rona, plus great service, so we will be patronizing them first from now on. I didn’t have to climb up on my truck and load lumber. They have a fork lift to precisely place and stack stuff on top. I was very impressed.

The shelter plan calls for two layers of 3/4 inch plywood. We added one this time. One layer is good enough for most severe weather that would involve some windows being knocked out by hail or maybe a small microburst. Not enough for say an F3, but pretty good. 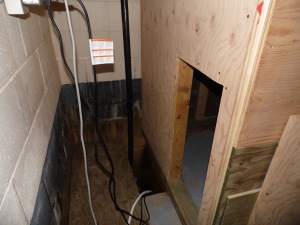 Hubby dearest is a bit paranoid about us being trapped in the closet so we have added an escape hatch at the end opposite the door. This is bolted in but if we find the door buried we can undo the bolts and pull the hatch door in, airplane emergency door style. Hopefully we won’t need it. You can also see our sump pump hole. We are going to use the leftover PWF stuff and make a proper cover and we have purchased a back up sump pump that will run on DC power because the place will flood in heavy rain if the power is out. The battery will be inside the closet and also give us DC lights. 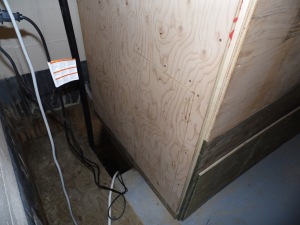 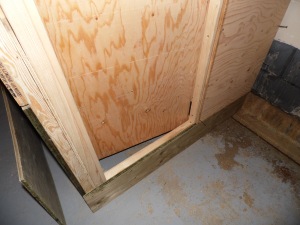 A shelter is only as good as the door so we framed that in. No storm is sucking that door out! Inside is more problematic. The local lumber shop did not have any big heavy duty dead bolts as we put three of these little ones in for now but they are not adequate for keeping the door closed with heavy flying debris coming at it. We’ll work on better reinforcing today.

And so we are kind of ready. Our plan is to finish and bolt in the escape hatch today, reinforce the door, and then begin stocking the space. We will move the pets kennels in first thing. That way if we need to take shelter, they can be locked up. I once took a dog through a car wash and I learned it is not pleasant to have a panicking dog in a small space. We will also put in a bench for us to sit on. We will also add emergency supplies in case we have to sit in it for an extended time or need to undo bolts or saw and pry debris in order to get out.

And the primary purpose of this space is storage, not shelter, and so I intend to put in lots of shelves, big ones, small ones perfect for canned goods, places for boxes, hooks to hang stuff, junk and treasures too good to toss. Oh glorious wonderful storage space! You shall be fulfilled soon.

The guy in the lumber store asked us what we were building. I told him a reinforced storage closet that could double as a shelter for a tornado. He went white and then described how his brother’s home was a mere 100 yards from the path of the infamous Elie Manitoba F5. He then added one more happy thought.

“And if you have this ready, you’ll never need it. This will be the cheapest insurance you ever paid for.”

I sure hope he’s right.

And as if to prove it: 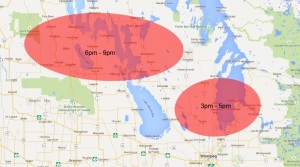 The professional storm chasers in their reinforced vehicles have converged on Manitoba and put out their own predictions and we are about 20km outside the upper bullseye.

Work continued on our shelter. The framing is done and the men moved to the door. FEMA has an entire pamphlet on the door for a shelter because the shelter is only as good as the door. You can have the best shelter there is but if your door is weak you’ll end up like the father of the lady scientist in the movie Twister, sucked up for some close and personal encounters with the big one. After checking the diagrams FEMA has, our engineer decided we would need to make a door with the same specifications as the walls, two layers of 3/4 inches plywood glued together and then screwed together. We went to the lake for a swim while we were waiting for the glue to set. It was so pleasant we stayed to watch the sunset.

Back to work. The door needs some heavy duty hinges, and then it would need to be framed into the structure itself, so that even with extreme sucking it would not be able to open outward. It would also need some fancy deadbolt hardware on the inside. Given the design, the basic door had to go in before the layering of plywood and framing on the outside.

Industrial strength hinges with the screws also glued in to make it strong. By this point we were out of wood and Bryan has to leave for a visit with family. He’ll be back in a week and we have plans to go to a country music concert weekend.

This morning we were awakened by thunder storms. A quick check of the radar showed severe storms approaching fast. Then we had some fun watching more rotating clouds overhead doing the eery green thing while Environment Canada issued warnings. Wow it came up fast! Twenty minutes between nothing on radar and then this strong storm. It passed us by, dumped a bunch of golf ball sized hail into the lake 12 kilometres east of us, and we are now sitting in a severe thunderstorm watch with more storms expected later today. Ever feel like you’re in a bulls eye or someone is trying to give you a message?

We had planned on waiting until next month to purchase the next $300 or so of stuff we need to finish the shelter. However the forecast is for extreme heat (35C/95F) until Saturday and then an approaching cold front will mean yet another round of severe storms. So we may yet decide to buy the rest on the line of credit and finish this thing for Saturday. For today though, we will just get caught up on other stuff. Having company is great. Having a project to build is a lot of fun. Still we are behind on a whole bunch of little things, there is sawdust everywhere in my house. All the floors need washing. Time to get to work.