Yesterday we met with the radiological interventionists via telehealth conference. This meant we could have a face to face meeting with the doctor without driving all the way to Winnipeg. It was a weird turn of events for us because years ago it was my husband set up the first ever working Manitoba telehealth link. The meeting went very well and it sure was nice not to have to drive two and a half hours to Winnipeg for it.

We first shared the clinical details of my husband’s condition which is, at the present time is he has no symptoms. The minor stroke symptoms have largely resolved. We are now working to lower the number of blood pressure medications he is on in a slow way while monitoring to make sure the blood pressure does not go back up.

We also got a radiological description of the kind, type and size of the dissection my husband had and why the second CT showed his is “worse” than it was before. We also learned that in some ways the dissection is actually better. This image shows the basic issue we are dealing with. 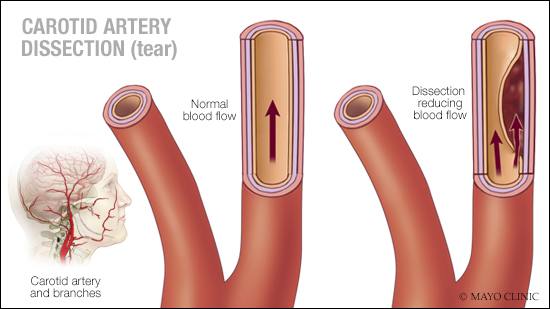 There is a blood clot sitting where the tear shows the blood running into the space in this image. The mild stroke my husband may have had is probably due to when the tear first happened and that clot was forming. Part of the clot may have got swept up in the bloodstream and ended up lodging in the brain farther up possibly causing a mild stroke. That blood clot has shrunk. That is good news because the fact that it is shrinking means the artery is healing. The bad news is that the size and length of the blister like formation (often called pseudoaneurysm) within the artery wall grew a lot from when he had his first and second CT in hospital. It got both thicker (making the artery narrower) and longer.

The decision we have to make is whether to leave it alone and give it more time to heal or go for a stent. Such stenting is commonly done in cases where there is atherosclerotic plaques in the artery causing reduced blood flood as in this image. 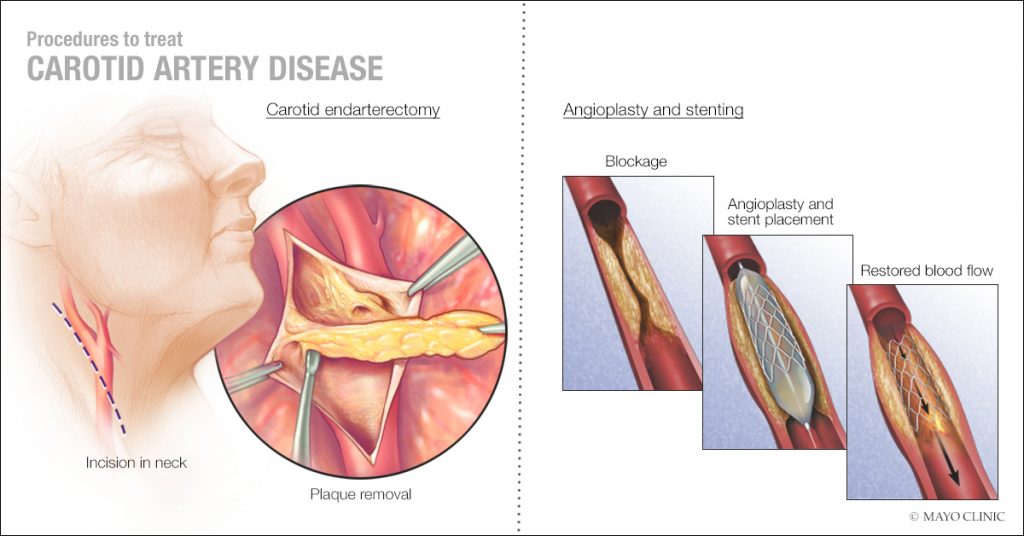 However this is not the problem my husband has. In fact the CT and other tests he had done show he actually has almost no atherosclerotic plaques. Also because of the size and length of the “blister” he would need to have two stents put in a “pipeline” to fix it.

There is no doubt at all that the pipeline stenting works very well and is an excellent way to repair the damaged artery. The problem is this procedure is relatively high risk. The chances of this procedure causing a catastrophic outcome, like shattering the artery altogether or causing a huge stroke are, depending on what criteria you measure, about 5% (2-10%). In my husband’s particular situation, because of where the “blister” is, in a bendy part of the artery where it is hard to get good CT images, and the basket for catching clots can’t be deployed, we were told it is about 5-10%. There are also long term potential consequences such as the stent plugging up again, or breaking through the artery, and causing more damage over time.

Obviously, if the blood supply to brain is so poor it is causing symptoms, taking that risk is well worth it. Having a stent put in will probably fix it. The risks of the procedure are well worth the potential benefits compared to having not enough blood get to the brain.

What if there are no symptoms? In my husband’s case, he has no symptoms. Neurologically and physically he is perfectly fine. So should he take the risk of stenting or wait and give it more time to heal on its own? The risk is that the “blister” will continue grow and block the artery and cause a crisis down the road. He could die or have a major stroke before we can get to Winnipeg and get a stent put in.

After our discussion we, meaning my husband, the doctor and I, made a considered decision to do what my husband calls “watchful waiting” for now. The doctor wants to try to get a better feel for when and how the “blister” formed. Did it form after he got out of the hospital and now has stopped growing? Is it now healing after the whiplash setback? Has the “blister” been slowly growing the entire time and will it therefore continue to grow? In order answer to this question, we decided to have a fourth CT in two weeks. This is enough time after the first view of the “blister” to ascertain if the blister is growing or healing or staying the same. Until then, as long as there is no reappearance of any of the symptoms of the dissection we do nothing. If any of those symptoms start, we immediately get to the hospital.

After we had that visit, I had some words to use in a search of Pubmed and Google Scholar. I found some review articles on what to do. There just isn’t a lot of good large studies. Most doctors say go right in with the stent and fix it now in a controlled way. This approach is the absolute best for anyone with symptoms. However in people with no symptoms, if you choose to do nothing, the few studies suggest most of the time nothing happens or the artery heals completely or partially. People can walk around for years with that “blister” without a problem.

There is a very strong fear in the medical community that leaving it alone means you will have a high chance of some future uncontrolled catastrophe. Most of the medical literature on why one should go in and stent begins with that assumption. If you do nothing, the patient is going to eventually rupture and have a bad outcome. You must take the risk and do something now.

I then traced back to the original literature that says you must do something now or else. I learned something very important. That literature is based on assumptions that date from before widespread use of CT. Those studies also often mixed up the pseudoaneurysm with full aneurysms. Those studies also included very large defects, many so large you could feel them pulsing in the patient’s neck. Smaller ones are being found with CT no one knew were there before. So the old data on how extremely risky these ‘blisters’ are may not be correct for smaller ones. What few not very good studies there are suggest that these smaller ones usually stay the same, or heal on their own. We just don’t know. There is not enough data.

Doctors are not very good at sitting back and doing nothing. The whole profession revolves around going in and fixing problems. Doctors get sued more often for doing nothing than for doing something and having the procedure go wrong. It is also really hard for a doctor to hear that they risked their patients and caused unnecessary pain and suffering even death when they should have just left well enough alone. It is a good doctor’s worst possible nightmare.

In our case, we discussed the pros and cons. The doctor gave us lots of information. My husband assessed the information and discussed it with me. We asked a lot of questions. We decided to do nothing for now. I think if we had urged the doctor to go ahead and arrange the stenting right away he would have agreed to do that. I am also certain he agreed with our decision to wait. He is a good doctor who practices informed consent and respects my husband’s right to make his own informed decision about his own body. The decision is my husband’s and the consequences are his to live with. Whatever happens, it will not be the doctor’s fault.

Of course our decision may change given the results of the next CT. And, of course, if symptoms appear, the whole equation changes.

This is our decision. Your mileage may vary.

Update: Another article “Experience of a single center in the conservative approach of 20 consecutive cases of asymptomatic extracranial carotid artery aneurysms” from 2018 also supports the watchful waiting approach. In this article the author also points out older literature on why you should not wait is likely not applicable for the reasons I gave. Note this is a small study. More research is needed.