Looks like we are in for a nice day of storms with thunder and lightning, heavy rain, hail, high winds and possibly a tornado or two. There is a cold front crossing a warm front and it is currently three counties west of us moving east. We are staying indoors watching the radar, ready to move to a more sheltered spot if anything close by is threatening. Travel trailers do not take severe weather very well. In fact, statistically speaking, you are better off outside lying on the ground than sitting out a severe storm in your trailer. Meantime I have a bunch of figures for our book that need doing so I will flip back and forth between Compisitor and NOAA until this front passes. If you are in the way of any nasty weather, stay alert, stay safe. 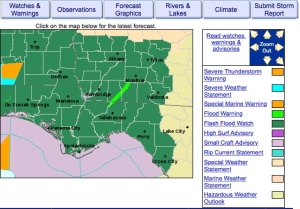 I didn’t have my camera so I don’t have a picture but yesterday while walking the dogs we saw a flock of about 30 adult whooping cranes mixed with some vultures a level below and a few pelicans as well, riding the thermals and soaring around high above us. We are very close to the St Mark’s refuge where they overwinter and they tend to spread out past the refuge. Shortly after I got a message from the whopping crane caretakers saying they had arrived with the youngsters. The eastern flock has about 100 individuals, maybe a few more more.

The world is not such a bad place when whooping cranes can be brought back from the edge of extinction by some dedicated people. However our host has since told us that you don’t see whopping cranes in such numbers in Florida and what we were actually seeing was more likely to have been wood storks.

This is a wood stork.

It is Not my picture. But this is about what we saw except they were going around in a giant circle. So we saw a large white bird with black wingtips, either a stork or a whooping crane. In any case it was lovely and thrill to see..

We had a special treat. We drove with our host Jack Rudloe to Clearwater Marine Aquarium near Tampa Florida. We got to meet the famous dolphin, Winter, from “Dolphin’s Tale” movie during a VIP behind the scenes tour. We then got to accompany the folks from Clearwater to the release of two sea turtles who had been suffering from a severe virus caused turtle cancer called papilloma. What better way to spend a day than that?

I can’t say I was impressed by Clearwater. It’s a resort. No wilderness.

If you saw the movie you should recognize this, especially the boat. 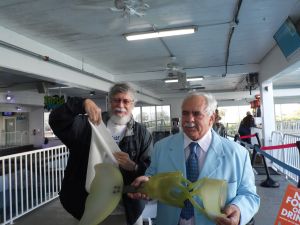 We got to meet Winter in person. She looked at us and did the dolphin smile thing.

Next stop was to see Prince the sea turtle who was being prepared for his return to the ocean. We were part of the entourage going to release him. It’s very special to have a VIP friend. We saw Prince the turtle released back to the wild, fully recovered. 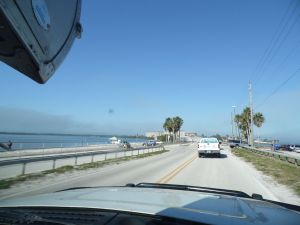 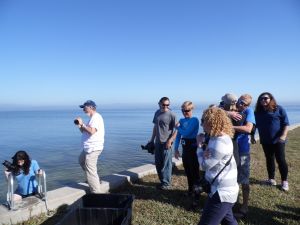 Bryozoans are a neat kind of ocean creatures that look like plants but are actually animals. They live attached onto things and they are of great interest to scientists. One of their more interesting aspects is they contain natural compounds used to treat cancer. Gulf Specimen Marine Lab supplies lots of things to scientists. Jack told us he needed to run out and collect some for an order and asked if we wanted to come along. Did we ever! Any collecting mission is always a fascinating lesson. It’s also fascinating to see Jack’s years of experience in action. He glanced out at his dock and muttered that the tide is high, so we can likely find them off marina dock at Alligator point. And we did. Of course we also got a lesson on a bunch of the other critters living on the dock while we were at it. “The Living Dock” is of course one of Jack Rudloe’s many books. It is such a privilege to have him for a friend. I added a tube clip on the bottom about “The Living Dock.” You can also get a feel for the lovely scenery and warm temperatures we are enjoying. 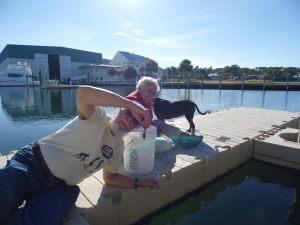 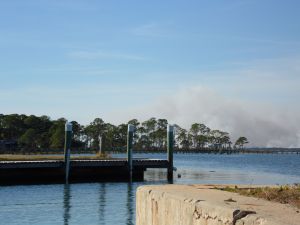 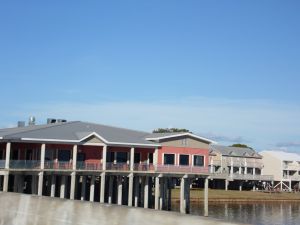 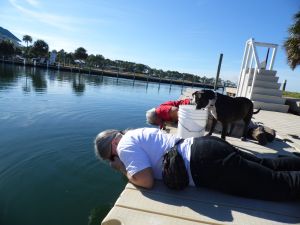 Not sure if we can stand this much longer. The daily temperatures are typically 76C/24C for the high and 12C/54C at night. I had to gather up all our winter things and put them away and haul out all the summer clothing, short sleeved shirts and T shirts. The locals laugh when I say it’s almost too warm. We have been taking walks on the beach almost every day except when we take long walks in one of the many local nature preserves. There is a great little store in Panacea with a resident in store butcher. We have been eating local fish almost every day. We haven’t gotten tired enough of walking the beaches and woods to get the canoe and bikes out but maybe today, if we feel like it. We fell asleep to the sound of a great horned owl. And we are getting a lot of writing done. I have also been making figures for our book and as usual hubby dearest and I have had a few heated discussions about specific points in our joint book. I am now reading Jack’s latest book with an eye to advising him on scientists’ behaviour and doing a figure for him. Cypress has asked me to have a look at the sea-mobile’s vent with an eye to advising him on installing a fan since I have done that on our own rig. When the sea mobile comes back on Friday I’ll do that. We have many friends to catch up with, multiple dinner invitations. The synagogue in Tallahassee is gearing up for Channukah and we have made our reservations for that. Saturday is the big Christmas parade’festival in Tallahassee and we’re going to that. A local choir of over 100 people is planning a Hallelujah Chorus and we’re going to go to that. Such a hard life!