I live just a tiny bit south of the 51st parallel. We escape to the southern US for the winter but for various reasons having to do with governmental bureaucracies we leave in winter and return to winter. This year that was even more true than usual due to an unusually cold spring. It was not record breaking, but you have to go back to the 1970s to match some of the weather we’ve had since we returned home March 26th.

I spent the time finishing the painting in the bathroom and hunting for deals for new flooring and exterior doors. I found the flooring, the doors not yet. Meantime in spite of how cold it was, I decided to be an optimist and knowing spring was going to come sooner or later I started some plants from seed. Unfortunately I made a  mistake preparing my seed last fall and left almost everything in paper envelopes on one jar. I opened to find everything covered in mold. I had to order new seed because of that. Live and learn. It was my third year keeping seed and now I know what not to do. Fortunately my garlic and onion seeds were not among them so I have those at least. Since I was ordering more seed anyway, I decided to try something. New to this year’s gardening is flowers from seed. I had never started flowers from seed indoors before. 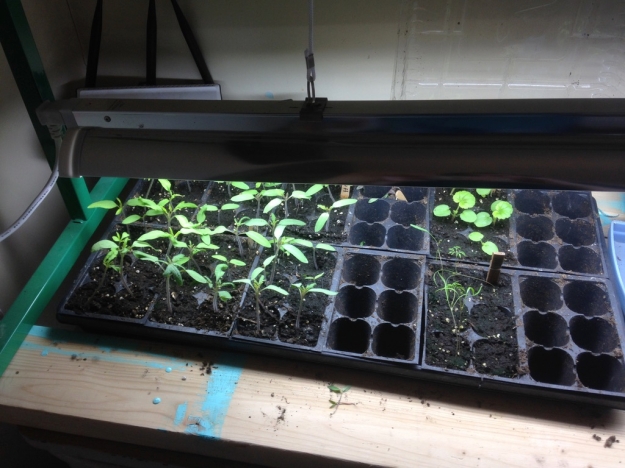 Day before last it was finally warm enough to get my little greenhouse out and, as you see from the blanks in my seed tray, I have been transplanting the faster growing zucchini and cucumber into bigger pots. I have been having great luck with zucchini grown in big pots and not such great luck with cucumbers in the garden so this year I thought I would try growing cucumbers in pots. They are currently in my little greenhouse. 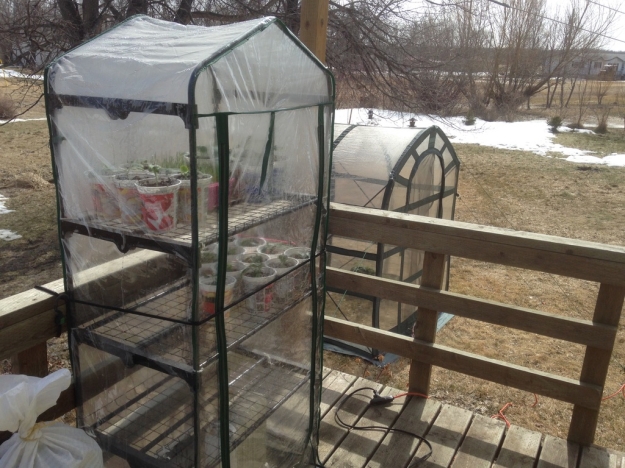 Now one issue with growing things in big pots is they don’t fit into this little greenhouse so when I spotted a big tent style greenhouse at a church rummage sale for $5.00 last fall I jumped at it and after getting my little one out and set up I tackled the ‘new’ one. It was quite the bear to set up because the ground is still frozen and it was hard to get the stakes in. However they did finally go when heated with some hot water and once up, the tent greenhouse was surprisingly roomy. I am considering retiring the cover on the little one and using the frame for shelving in the big one. We shall see. 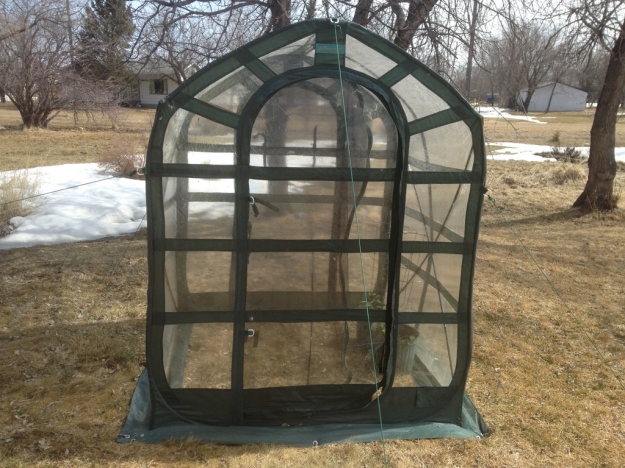 The tent greenhouse already has two occupants. I have not had any luck at all getting one of my favourites, morning glories, to grow here so I decided to try them from seed. I miscalculated because they were the first thing to come up and the first little plants to outgrow their starting containers. It was astonishing how quickly they grew! Morning glories are also incredibly fussy about being transplanted and usually respond by giving up and dying. So I figured they had to go directly into big pots. I started with 12 and I currently have six left. I lost one to transplanting and four to our rambunctious puppy and one just keeled over and died for no apparent reason. They do seem to like the big greenhouse.

There is very little else in the way of spring though. Last year for Canada Day the government decided to celebrate our nations’ 150th birthday by spending our tax dollars on little seedling trees. We planted 120 on our property outside of town since they are native to our area and were extirpated by settlers. We planted several in our yard and some fared better than others. All my larger spruce trees made it through the winter, helped no doubt by the heavy layer of snow. Somewhere in my perennial bed is a bunch of daffodil bulbs I added last fall. Hopefully the red and white tulips that bloomed for Canada’s 150th birthday made it as well.

My yard and garden is a big mess. It is still half covered with snow and will need a good cleaning and the garden will need a thorough roto tilling before planting but that is still weeks away. At the 51st parallel there is no point planting before June. I did find one sign of life in my herb box. I harvested most of my garlic from seed and brought it inside to be set out again in the spring (or to be eaten as some was) but I must have missed some plants because I actually have some garlic from last year poking up through the dirt. My strawberry plants seem to have made it and my tiny Saskatoon bushes seem intact. 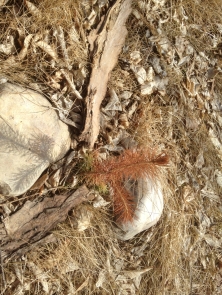 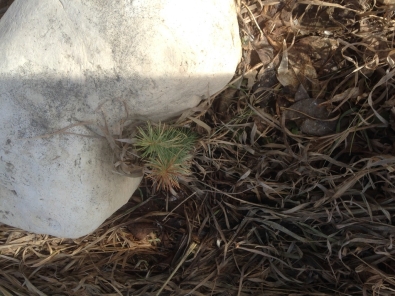 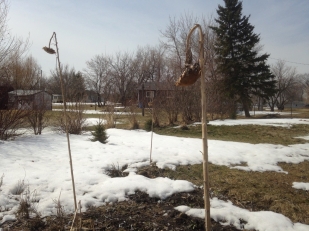 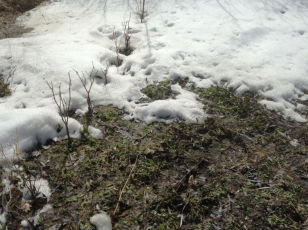 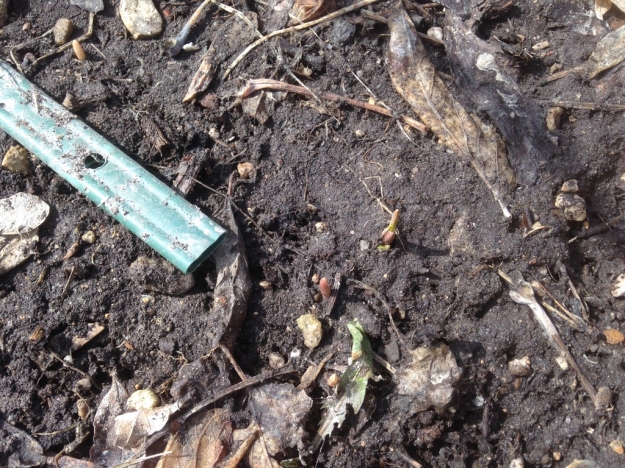 One more thing, our tomato bed on the back of the garage worked so well hubby dearest helped me put in a second larger bed beside it. As the season ended I dumped out all my tubs of zucchini and flowers into the garden. I threw in some egg shells as well. Eggshells serve two purposes. Female birds, especially swallows and swifts eat the shells for the nutrients as they get ready to lay their eggs and the shells break up easily and add calcium to the soil for the plants. Once the melt finishes I will clean it out, stomp the lumps of dirt down and add some fresh soil. I intend to keep using the old garden space for lettuce, greens, corn and potatoes because they did well there. Since I will be growing only those things in the old space I can put the rows far enough apart to easily till between rows with my little portable tiller.

I want to use the new space for beans, carrots, peas and other things that did not do well in the old garden spot. Plus this box is narrow enough I can plant things closer together and weed by hand and with a small trowel. Not yet though. As you can see it is still half full of snow and frozen solid. No matter, I saw the first robin this morning and the cranes arrived yesterday afternoon so I can finally say our long winter is over and spring is here. I expect we will get at least one more dusting of snowflakes and weeks more of cold nights, but spring is finally here. 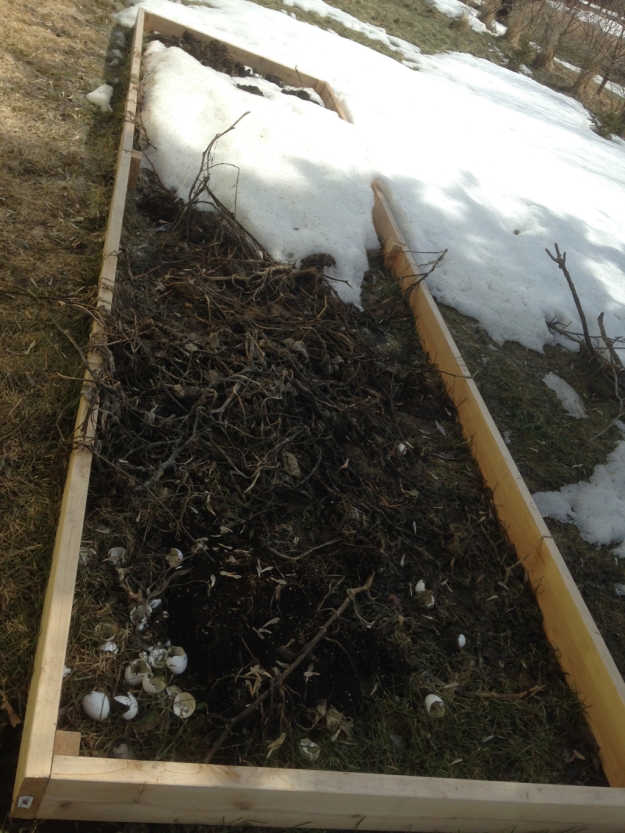